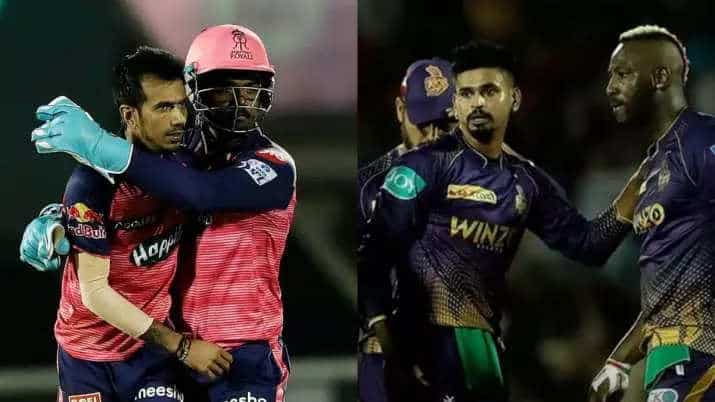 IPL 2022 LIVE: Another IPL game and another new face coming out on the grand stage to perform. The two-time champions, Kolkata Knight Riders, locked horns with the inaugural season champions, Rajasthan Royals, at the Wankhede Stadium. Both teams gave fans another nail-biting thriller that ended with a flare from the bat of a young KKR batter, Rinku Singh. It all started with the KKR skipper, Shreyas Iyer, winning the toss and asking RR to bat first.

However, it was not new for the RR as they have been winning by batting first in most of their games. But this time, they didn’t have the start they would have liked. RR lost Devdutt Padikkal in the third ball to Umesh Yadav. Although Buttler and skipper Sanju Samson steadied the inning and put on a 48-run partnership, the KKR bowlers didn’t let them score quickly. That brought the downfall of Buttler, who got out after playing an uncharacteristic innings of 22 off 25 balls. Karun Nair (13 off 13) and Riyan Parag (19 off 12) also got out early. The RR skipper also got out after reaching his half-century.

He scored 54 runs off 49 balls, including seven fours and one six. It looked like RR might not get to 150 as well. But a late cameo from Shimron Hetmyer (27 off 13) helped RR cross the 150-run mark. They ended their innings at 152/5 in their 20 overs, which was a below par score at the Wankhede.

It didn’t start well for KKR either. They lost their first two wickets in the first six overs. Both Aaron Finch (4 off 7) and Baba Indrajith (15 off 16) were back in the dugout within the power-play. But then came a match-saving innings of 60 runs for the third wicket between KKR skipper Shreyas Iyer and Nitish Rana. Both batters once again came to KKR’s rescue and played steadily. Here are best betting apps for Android and IOS.

However, the KKR captain got out at the wrong time to Boult, allowing RR to re-enter the game. But there was something else that was supposed to happen. When KKR needed 60 runs off 43 balls, Rinku Singh came into bat and joined Nitish in the crease. But he came with the aim of winning it for the team, and that’s what he did. Both batters added 68 runs for the fourth wicket to see KKR home. Nitish Rana was unbeaten on 48 off 37 balls and Rinku played a cameo of 42 runs.

It all looked tense when the KKR skipper lost his wicket. And many started to believe that RR had a chance. But it was Rinku Singh that changed the complete game in favor of the two-time champions. The young left-hander played a quick innings of 42* off 23 balls, including six fours and one maximum, to help his team get two vital points on the points table. With this victory, KKR has ended a five-match losing streak. For his tremendous effort, Rinku was named “Man of the Match.” Here’s our recent cricket betting tips today.