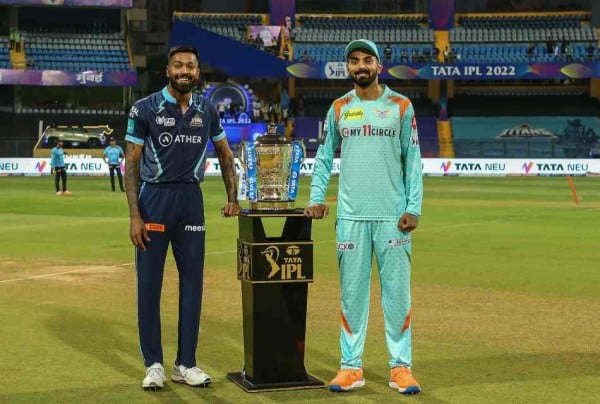 IPL 2022 LIVE: Low-scoring matches bring more thrills and excitement for the fans. That is what everyone saw on Tuesday when two of the top teams in this IPL season locked horns with each other at the Maharashtra Cricket Association stadium. In the end, it was the Gujarat Titans who came out victorious and won the match by a big margin of 62 runs despite defending a below-par score of 144. It all started with the toss.

Hardik Pandya won the toss and went to bat first. The pitch was assisting bowlers from the first ball. The LSG bowlers didn’t let both openers score runs in the power-play. As a result, GT lost the wickets of Wriddhiman Saha (5) and Mathew Wade (10) within the first five overs.

Hardik (11) couldn’t do much with the bat either and became the second victim of Avesh Khan. However, Shubman Gill was solid at the other end of the crease. He, along with David Miller, added 52 runs for the fourth wicket. Miller got out to Holder after scoring a struggling 26 off 24 balls.

Rahul Tewatia then joined the crease and added an unbeaten 41-run partnership with Gill. The opener brought up the third half-century of this season during the partnership. In the end, Gill was unbeaten on 63 off 49 and Tewatia on 22 off 16, helping their team to cross the 140-run mark. For LSG, Avesh Khan took 2/26 and was the star with the ball. Learn from the experts by read our best cricket betting tips and match guides for the 2022 season here for free.

Heading into the mid-innings break, LSG was very confident in chasing the below-par target. Both in-form openers joined the crease. However, it didn’t start well for Lucknow, as they lost both their openers and, in fact, three wickets in the power-play. Mohammed Shami and Yash Dayal bowled brilliant spells up front to put a brake on the scoring rate and took crucial wickets as well. Shami gave away just five runs in his three overs and took the wicket of KL Rahul for the second time in two matches.

But throughout the innings, LSG didn’t look comfortable against the GT bowlers and kept losing wickets. After a good start from the seamers, Rashid Khan came into the scene and took four wickets in the middle overs. That ended the hope for Lucknow to chase the target. In the end, they were all out at 82 runs, which registered the second-lowest team score this season. Rashid finished with 4/24 in the innings.

The right-handed opening batter once came to the rescue of the Gujarat Titans this season. He has done it twice this season and scored another match-winning half-century last night. He carried his bat throughout the whole innings and remained unbeaten till the very end. In the end, it was his knock that helped GT to post a decent score, and in the end, it was a match-winning target. Gill was also named “Man of the Match” for his knock of 63. Read Bet365 reviews here and learn more about how this app works for online betting.