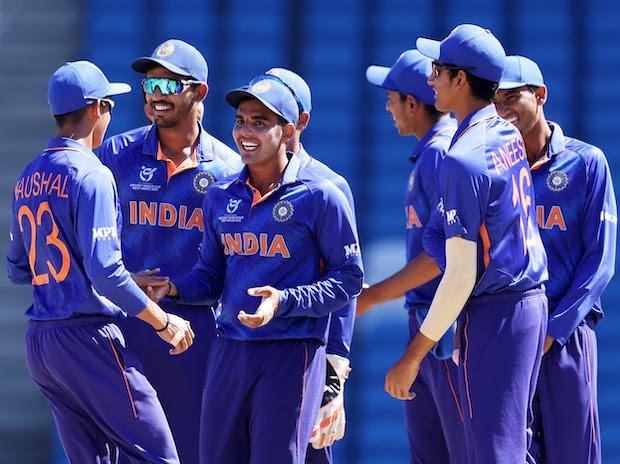 IPL 2022 Mega Auction: The U-19 World Cup 2022, currently being held in the West Indies, has thrown a number of young Indian players into the limelight. They would be hoping to get an IPL contract for the upcoming season.

With the IPL mega auctions set to take place in the first week of February, many franchises will be keeping a close eye on the tournament to draft some of these explosive players for the cash-rich domestic league.

Over the years, India’s Under-19 cricketers have made good money in IPL auctions, and it will be no different this time when the paddle goes up on February 12 and 13. From Virat Kohli (2008) to Ravindra Jadeja (2008) to KL Rahul (2010), all these players have made big for India or have become IPL stars after playing in different editions of the U-19 World Cup.

Similarly, the IPL 2022 auction will change the lives of many young stars and will give them the opportunity to showcase their talent on the grand stage. Here were take a look at 5 such young stars who can attract good bids in the upcoming mega auction. Here are trusted and best IPL betting sites in India.

Raj Bawa is perfectly suited for the T20 format. He can bowl three-four overs at ease and is an explosive batsman. The 19-year old grabbed headlines after registering the highest individual score by an Indian in U-19 World Cup. He smashed an unbeaten 162 off 108 against Uganda thereby helping India post a massive total of 405/5. The knock was enough for franchises to sit and take a note off.

The fast-bowling all-rounder was born on 12 December 2002 in Himachal Pradesh. He idolizes Yuvraj Singh and even dons the number 12 jersey which Yuvi used to wear. Interestingly, Raj bats left-handed but bowls as a right-handed bowler. After seeing his idol, Yuvraj Singh, he changed his batting stance.

Another Indian batter who has recently shown a lot of promise and is often compared to a young Rohit Sharma in Mumbai circles. Opener Angkrish Raghuvanshi is a very dependable batsman.

“When you see him batting in full flow, you feel that you’re watching a young Rohit Sharma. The way he pulls the ball, hits it over covers, reminds you of Rohit in his early days. For an 18-year-old, he generates tremendous power,”

Atul Ranade, Mumbai’s U-19 chief selector, in an interview with Times of India.

The right-handed batter from Mumbai scored 79 against Ireland and then a daddy hundred (144 off 120 balls) against Uganda. So, he will undoubtedly be one of the most sought-after names in the auction.

He is the best bowler in the current India U-19 squad, as evidenced by his 5/28 against South Africa. He has the potential to become the U-19 World Cup’s leading wicket-taker in 2022, which would be an excellent addition to his already impressive resume.

Good Indian spinners with a bit of mystery are a rare commodity, so Ostwal will certainly get a good deal in the IPL auction. Here’s our IPL betting tips and advice, so that you will be guided.

He is the captain of the India U-19 team and is capable of playing in all formats. He is just as good as Harnoor Singh and has a lot more potential. His knock against South Africa (82 off 100 balls) was outstanding. Unfortunately, he tested positive for COVID-19 and was unable to compete in the following matches.

However, he has already demonstrated his ability and will be able to secure a number of franchises in the IPL 2022 mega auction. Moreover, in the last few seasons of the IPL, India’s U-19 captains have always been sold for a high price.

Many believe that Rajvardhan Hangargekar, who leads the Indian seam attack, has a bright future ahead of him. But what makes him a great addition to any side is the fact that he is no mug with the bat as well.

Hangargekar demonstrated his batting prowess against Ireland in the U-19 World Cup, hitting three consecutive sixes. He has already taken four wickets with a fantastic economy rate of 3.50. It will undoubtedly pique the interest of a few IPL franchises. Here’s complete list of online cricket betting apps in india.