IPL 2022: Skipper KL Rahul Reveals the Logic Behind Picking Stoinis and Bishnoi in the Team 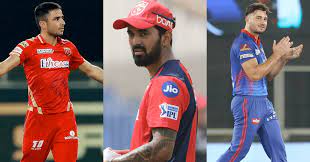 The idea behind (picking) Stoinis and Bishnoi is very simple. When you are trying to get three retentions, you want to get three pillars sorted. You have an opening batter in me, you have an all-rounder in Stoinis, who can bat No. 5-6. We’ve seen that in Big Bash, he has opened as well. He’s a very flexible player. He gives you a sixth bowling option as well.”

Marcus Stoinis played the last two seasons of the Indian Premier League for the Delhi Capitals before being picked as a draft player by the Lucknow team. Earlier than that, Stoinis was part of Kings XI Punjab (now Punjab Kings), where he was with KL Rahul as a team member. On the other hand, Ravi Bishnoi, who played under KL Rahul in Punjab Kings in the 2020 and 2021 seasons. Check the bbl 2022 schedule and the latest news here.

KL Rahul also praised the all-around ability of Marcus Stoinis and the variety Bishnoi could offer the team. He said,

“Marcus is a very committed player and is a brilliant team man. Bishnoi has a big heart for a youngster who hasn’t played too much. In IPL cricket he has shown a lot of heart. He wanted to be in the fight and bowl to the likes of Pollard, Russell, Hardik, and Rishabh. Whenever they came in, he would say, ‘bhaiyya mujhe ball do’. I can see him playing for India soon and for a long time.”

IPL 2022: On Monday, the team owner revealed the name of the team: Lucknow Super Giants. The Lucknow team was bought by the RPSG group for a whopping sum of INR 7090 crore. They appointed KL Rahul, a former Punjab Kings skipper, to lead their side in the IPL.

Rahul was picked by the team for a record sum of INR 17 crore, the joint-most fee received by a player in the IPL. The while they also landed Australian all-rounder Marcus Stoinis and uncapped Indian young spinner Ravi Bishnoi for Rs 9.2 crore, and Rs 4 crore, respectively. Former Zimbabwean cricketer Andy Flower has been named head coach of the Lucknow team for the IPL 2022 season, and former India opener Gautam Gambhir has been named mentor. Take a look our cricket prediction and get some free tips from us.