Crictips Exclusive: Strongest XI for KKR to challenge for Trophy in IPL 2022 Trophy 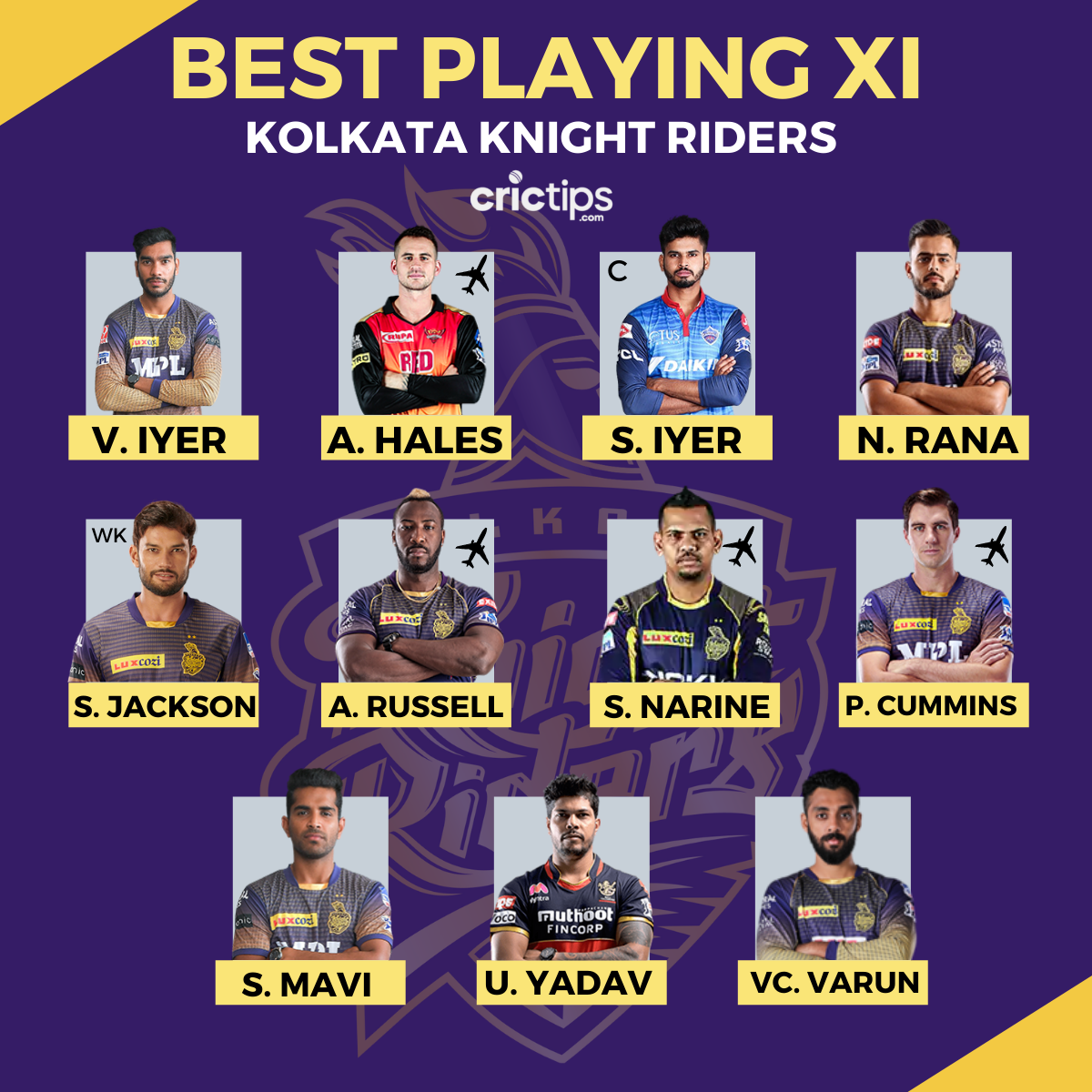 IPL 2022: The Indian Premier League (IPL) 2022 season kicks off in less than a month. The first game of the 15th season will be a rematch of the IPL 2022 final between MS Dhoni’s Chennai Super Kings and Shreyas Iyer’s Kolkata Knight Riders. For more IPL betting Apps, check it out here on our site.

KKR retained Varun Chakravarthy, Sunil Narine, Andre Russell, and Venkatesh Iyer ahead of the IPL 2022 auction. The spin duo of Narine and Chakravarthy was crucial to their success in the second half of IPL 2021, and KKR will rely heavily on the same pair this time around.

During the auction, KKR retained the core group from their run to the finals. With a limited purse, KKR purchased a total of 21 players. KKR’s most important buy in the auction was that of Shreyas Iyer, who became the third most expensive player at the auction.

While KKR has most of the bases covered, the issues which plagued them badly in the last cycle could hurt them again in the coming season. The lack of a cutting edge in their pace contingent to strike on the Powerplay and stemming the flow of runs at the death overs.

It remains to be seen whether Cummins steps up and fills the void left by Lockie Ferguson. Overall they have a squad that can challenge for the trophy. Here we take a look at the strongest playing XI for KKR in the upcoming season.

IPL 2022: Best starting XI of KKR for the upcoming season

Although Venkatesh Iyer plays a different role for Team India, he will continue to open for his franchise. His story is quite filmy, with twists reminiscent of Bollywood films. Venkatesh was introduced by KKR in the UAE leg. He was given a chance due to the previous opening pair’s poor performance. He seized the opportunity with both hands.

Iyer scored 370 runs in 10 games, striking at 128 and at a healthy average of 41. His outstanding performance in the UAE leg earned him a spot on the Indian cricket team. In November 2021, he made his T20I debut for India against New Zealand. Iyer has proved to be quite handy as an all-rounder in the recent series vs West Indies.

Alex Hales will enter the upcoming season on the back of a good season in PSL. KKR drafted Hales in the dying moments of the auction at his base price of INR 2 crore. The right-handed batter has accumulated 317 runs in 8 innings, at an average of 42.50 and strike rate of 156.44. He was the first English batter to score a century in T20Is.

Hales who made his IPL debut in 2018 for Sunrisers Hyderabad is yet to prove himself in the cash-rich league. This year could be a watershed moment for the batter.

KKR broke the bank to get Shreyas Iyer and why not if you can play in such flamboyant style. The 25-year old had a record-breaking outing in the just concluded T20Is vs Sri Lanka. Iyer, who smashed 204 runs at a staggering strike rate of 173, surpassed Virat Kohli for most runs by an Indian in a 3 match T20I series.

Adding to this, he has been appointed as the leader for the upcoming season. Shreyas has done well for his former franchise Delhi Capitals. After the departure of Gautam Gambhir, KKR were longing for a dependable captain. And they now have one for the foreseeable future.

Last season, the left-handed batsman scored 383 runs at a 29.46 average, including two half-centuries. He can also be used as a floater in the upcoming season. The southpaw has opened for KKR in the past, and he can get back the opening slot if the openers fail to deliver.

Andre Russell and Sunil Narine automatically pick themselves in the KKR playing XI. Russell, when fit, can be a valuable asset to KKR. He has the potential to be a match-winner with both bat and ball.

The most serious issue with him is a knee injury that has kept him out of the IPL 2021 final. If that is the case, KKR can use Chamika Karunaratne or Sam Billings depending on the circumstances.

Sheldon Jackson is a reliable Saurashtra wicketkeeper-batter. He has been a part of the IPL since 2009, but he had to wait a long time to make it to the playing 11. He made his IPL debut in 2017 with Kolkata and appeared in four games for KKR that season.

The keeper has been playing domestic cricket since 2006, but he has not had a particularly successful career. The 2022 IPL season could be a breakthrough season for him.

Sunil Narine is an obvious choice for KKR’s starting XI. Regardless of the bowling conditions, he is a must-have in the team. He can take wickets on any surface and is no slouch with the willow in hand.

Narine adds versatility to the KKR batting lineup and can be used as a “pinch hitter”. He smashed the fastest half-century in Bangladesh Premier League (BPL) history in the recently concluded season. The 33-year old scored 50 of just 13 balls to help Comilla Victorians reach the BPL final.

Pat Cummins is another player who is a no-brainer in playing XI. Although the Australia Test captain doesn’t feature regularly in the T20Is yet he is a valuable pick.

Cummins’ presence will add to the wealth of bowling and leadership experience on the team. He recently led Australia to a 4-0 Ashes win. He is no mug with the bat and does have the power game, which makes him a utility player.

Shivam Mavi was drafted by KKR in 2018 when he was playing U19 World Cup. He impressed all and dominated the tournament with his raw pace. He has since spent four seasons with KKR but mostly on the sidelines.

Mavi suffered an ACL injury and was out of action for the entire 2019 season. Since then he has been in and out of the side. Mavi has picked 25 wickets in 26 IPL games. His career is still in its early stages, and he has a lot more to accomplish in the coming years.

Umesh Yadav was a member of the Delhi Capitals last season, but he did not appear in any games. He was picked by KKR for his base price of INR 2 crore.

Yadav has picked 119 wickets at a bowling average of 30.08 in 121 IPL games. He has also played for RCB in a few seasons, in addition to Delhi and Kolkata. After three years, the pacer is returning to the KKR squad. He could pose a stiff challenge to the batters as the wickets in Mumbai and Pune will offer swing to the fast bowlers.

Mystery spinner Varun Chakravarthy is another player who is injury-prone. Chakravarthy, the architect-turned-cricketer, was unplayable in the previous two IPL seasons.

In the 2018 season, he made his debut for Tamil Nadu. Following a strong showing in domestic tournaments, he was selected by Punjab Kings for the 2019 IPL season. However, the million-dollar boy was ineffective.

He was then purchased by KKR in the 2020 auction and has dividends to KKR’s faith in him. He has played 31 games and picked 36 wickets at an impressive average of 23. Here are our Cricket betting sites list and upcoming match updates.