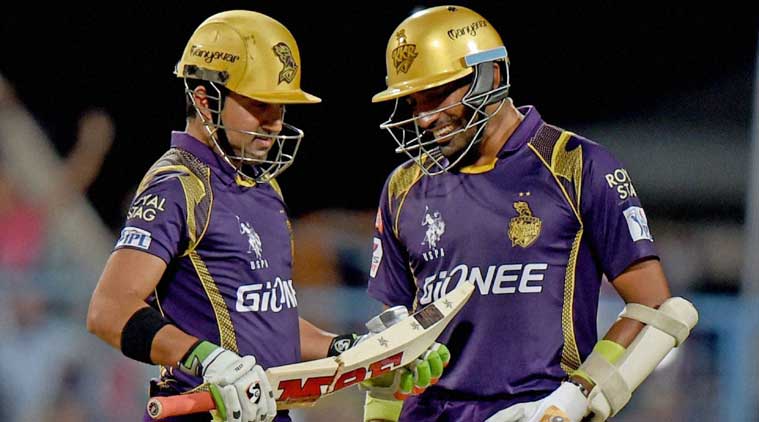 IPL 2022: KKR had a significant influence in making IPL, what it is today. Brendon McCullum kick-started the IPL on 18th April 2008 as his 158* of 73 balls changed cricket forever. At that time the T20 format was just beginning to gain recognition. It seemed that the Kiwi will take KKR to great heights.

But it was Gautam Gambhir who took KKR to the pinnacle of ultimate glory. His aggressive nature gelled with captaincy and that reflected in his batting. Domestic players such as Debabrata Das, Manvinder Bisla, and Robin Uthappa have also contributed to KKR’s success. In this feature, we take a look at the top 3 run-scorers for KKR in tournament history. For all IPL team’s lists and Match predictions, read more here on our site.

When it comes to performing consistently, Gautam Gambhir was the keeper of the key. Hence, it is no coincidence that he is the highest run-scorer for KKR. In a span of six years, the southpaw has accumulated 3345 runs at an impressive 31 runs per wicket and strike rate of 124.72.

KKR laid their hands on the trophy for the first time in 2012 after a nail-biting clash against CSK. Gautam was a key contributor in both the captaincy and batting departments during the championship season, amassing 590 runs, including 6 half-centuries. He was the lone shining light with three consecutive half-centuries in what was a disappointing 2013 season for KKR.

The Delhi-born cricketer had an abysmal start to IPL 2014. But the fighter in Gautam refused to give up, and he continued to make crucial contributions, leading KKR to the play-offs. Victories over Kings XI Punjab, now Punjab Kings in the play-offs and in the final, ensured KKR’s place on the podium for the second time in two seasons. He has been appointed as the mentor of Lucknow Super Giants for IPL 2022.

Robin Uthappa was at the twilight of his career when he was part of the Kolkata-based franchise. He has enjoyed tremendous success and was at the heart of KKR’s batting lineup. The Karnataka-based lad made his debut for KKR in the seventh season. He played for KKR from 2014-to 2019 and accumulated 2649 in 91 innings at a strike rate of 135.84. For more 1xbet IPL reviews, check it out here on our site.

He didn’t have a good outing in the first half when the tournament was held in UAE. But the trigger movement came when Uthappa was promoted to open the batting alongside Gambhir. Buoy did his fortunes change. Uthappa emerged as the highest run-getter as he amassed 660 runs and won the orange cap. In the process, he also broke the record for most 40+ scores in a single IPL season which was previously held by Matthew Hayden.

Uthappa continued to pile runs – 364 in 2015, 394 in 2016, 388 in 2017 in the subsequent seasons. But there was a dip in form post that. In 2018, KKR roped in a number of young prospects including Shubman Gill and Nitish Rana. Following that, KKR decided to use him as a floater but the experiment failed. After the departure of Gambhir, the KKR management also started losing faith in him, and eventually, he was released from the squad before the 2020 season began.

The elder brother of Irfan Pathan, Yusuf was a destructive middle-order batter India once had. It was again Shane Warne, who noticed the spark in a 21-year-old Yusuf while playing for Rajasthan Royals. Pathan announced himself with a scintillating 100 of just 37 balls against Mumbai Indians in 2010, the then fastest century in IPL.

He was fast-tracked to KKR the subsequent season. Pathan had a decent first three seasons but the watershed moment came in a match against Sunrisers Hyderabad in 2014. KKR had to chase a target of 165 in 15.2 overs to leapfrog CSK for a top-two finish in the standings. As we all know, if any team finishes in the top two of the standings they get two shots to reach the final.

KKR were reeling at 78/4 in the 10th over when Pathan walked in the middle and only a miracle from there could have taken them home. That genius was Yusuf Pathan who smoked his way to the then fastest half-century in just 15 balls. He ended with 72 of just 22 balls. In the 15th over, he smashed Dale Steyn for 26 runs and took KKR home with one over to spare. Pathan continued to torment the bowlers accumulating 2061 runs in 122 innings at a strike rate of 135.84. For more IPL betting tips and guides from the experts, read more here on our site.