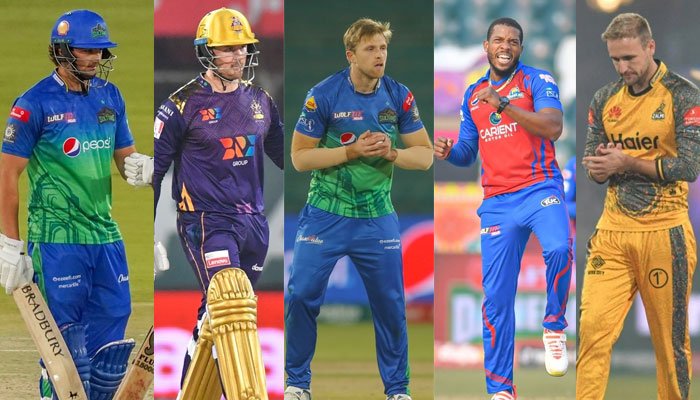 IPL 2022: The two-day event of the IPL mega auction has ended up and now all the teams will work on their playing XI for IPL 2022. Ishan Kishan turned out to be the costliest player for 15.25 Crore and went back to Mumbai Indians. Liam Livingstone was the costliest overseas player for 11.25 Crore and went to Punjab Kings. Find here the complete IPL team list and match prediction for the 2022 Season.

We always judge overseas players based on their performance in different T20 cricket leagues. One league which is on the list of IPL scouts is Pakistan Super League. Pakistani cricketers are not allowed to participate in IPL, but the overseas cricketers who play for PSL can get a good deal from IPL franchises.

Pakistan Super League produces some of the best action in T20 cricket. In recent times, it has come closer in terms of viewership to IPL and the Big Bash League. There are a lot of players who play for BBL at first and then immediately for PSL. In the past, it was seen that there are few uncapped players who have got the best deals in IPL auctions because they turned out to be match-winners in PSL and BBL.

Multan Sultans and Islamabad United have already qualified for playoffs in PSL. In this list, we have names who were top buys in IPL and did great in PSL as well.

Mumbai Indians made the right decision to buy the Singaporean cricketer Tim David. He came at a cost of 8.25 Crore for the franchise. Tim made headlines while playing for BBL but his performance in PSL was impeccable and this led MI to buy the player.

The 25-year-old has collected 241 runs in the tournament at an average of 41.83 and a strike rate of 199.20. In BBL as well, David was able to maintain his strike rate at 153. He made his debut in IPL for Royal Challengers Bangalore in 2021. This year MI will be giving him more playtime.

Gujarat Titans had a disappointing start to the IPL mega auctions. They were lost and were not aware of which player to bid for and which not to. Because of the same reason, Titans didn’t have any wicket-keepers till the last moment of the auction.

However, they made a brilliant decision by buying Jason Roy for a price of 2 Crore. The Englishman had a fantastic time while playing for Quetta Gladiators in PSL. He has scored 303 runs in just 6 matches at an average of 50. Among the foreign players, Roy is the highest scorer.

Get the latest and legit betting apps for IOS and Android.

Kolkata Knight Riders are known for buying some of the best players from the auction. Alex Hales went to KKR for his base price. However, looking at his performance in PSL, KKR will defiantly get a huge benefit from the cricketer.

Alex Hales can be a clever choice for KKR as he has got the ability to play some big shots in the middle overs. In PSL, Hales has been part of 7 matches and has scored 255 runs at an average of 40. If his form continues in IPL as well, KKR will get a huge benefit.

It is very clear that PSL is dominated by English cricketers. In the 2022 Pakistan Super League, English cricketers have done some wonders for their teams. David Willey, because of the same reason, went to Royal Challengers Bangalore from the IPL 2022 auction. Here are

In PSL 2022, Willey has picked up 10 wickets in just 6 matches at an average of 14.30. He will be one of the first-choice overseas players for RCB in the upcoming tournament of IPL. The pacer has disciplined line and length and can bowl constant yorkers.

Chirs Jordan is one of the best death-over specialists in the world. He has been part of 75 T20 internationals and has picked up 80 wickets while maintaining an economy of 8.66. Because of the same reason, Chennai Super Kings were quick to pick the Englishmen.

Jordan plays with Karachi Kings in PSL. The team had a very disappointing season of PSL this year. However, Jordan was the only performer on the team. He picked up 9 wickets in just 5 appearances. CSK will be expecting him to continue his form in IPL as well. Jordan’s yorkers and pace will benefit Chennai on Indian pitches but more than that his slower deliveries will suppose the batsman more.

Here’s the complete Cricket betting sites list for the 2022 Season.