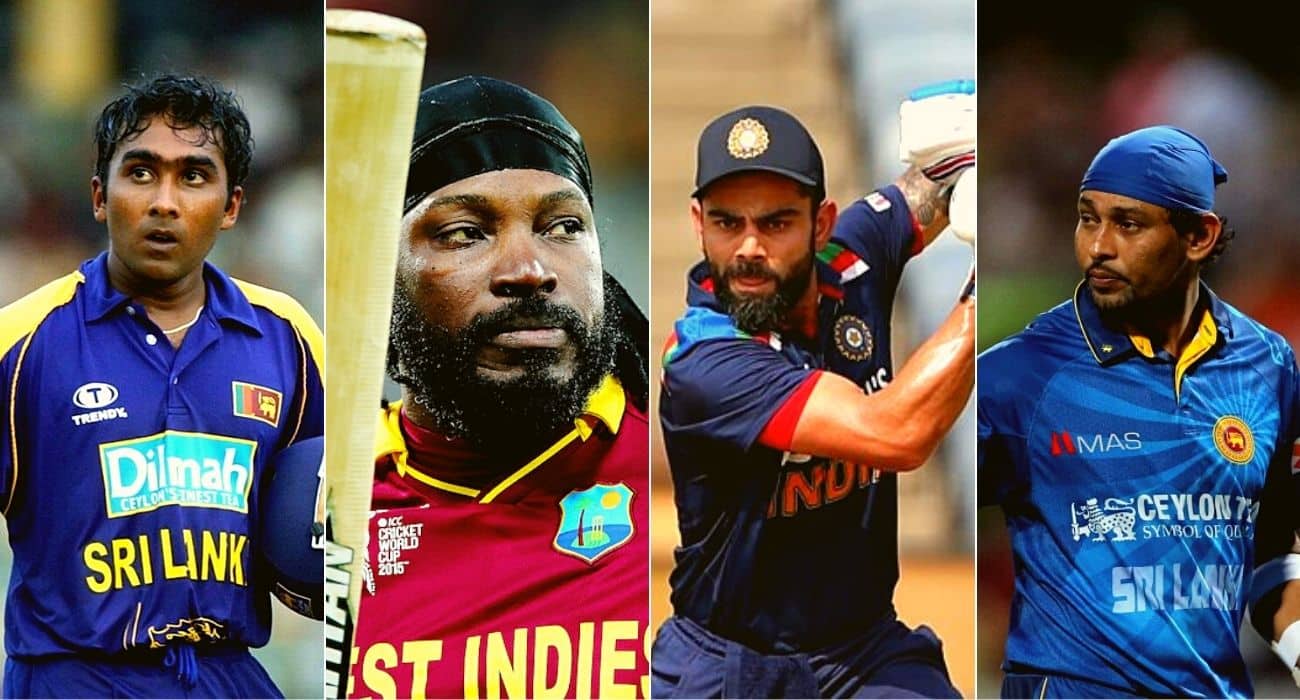 The T20 format is generally a batsman’s game right from a limited batting time to an aggressive batting style; it is all a player can ask for. The T20 World Cup is merely 6 days away from its commencement and what better time to reflect on some of the best performances? This format of the World Cup started in 2007 and the latest edition in 2021 was the 7th edition. From Matthew Hayden in 2007 to Babar Azam in 2021 here’s a list of all the top run scorers in the history of the T20 World Cup.

Here’s a list of all the top run scorers in the history of the T20 World Cup:

The inaugural edition of the T20 World Cup saw Australia legend Mathew Hayden take everyone by storm when he became the high scorer with 265 runs in six matches. Hayden displayed nothing but his usual way of stepping down the pitch and going after the bowler. Irrespective of the pace or spin, the batter had his gameplay set and made sure his team won. Hayden was the best hitter in the event despite his team’s failure to advance to the finals because of his technique of going unbeaten in run-chases throughout the competition.

Dilshan was the best batter in the competition by a wide margin over his rivals, winning the Player of the Tournament title for his 317 runs in 7 games. Thanks to Dilshan’s constant performances Sri Lanka reached the finals of the T20 World Cup. Dilshan scored 18 more boundaries than the next best player in the tournament (Jacques Kallis) thanks to his ability to find openings and strike the ball audaciously. He entered the fray right away with back-to-back half-centuries. Sri Lanka played Pakistan after going unbeaten throughout the group round, but they were unsuccessful in winning.

With his 81 off 51 balls versus New Zealand in Sri Lanka’s first game, Jayawardena, a veteran player in the team’s ranks, made a strong first impression. After that, Sri Lanka’s maiden and sole hundred of the T20 World Cup was scored by the first batsman against Zimbabwe, who did it in 100 of 64 pitches. In addition to this, he scored 3 back-to-back half-centuries and a score of 98 runs. Despite not going into the playoffs, he was the highest scorer with 302 runs.

Another Australian legend on the list is all-rounder Shane Watson. Watson in addition to guiding his team with the ball also opened the innings and was nothing short of a beast. In 6 games with a strike rate of 150 and an average of 49.80, he amassed 249 runs which also included 3 scores of 50+ runs.

The Indian middle-order batsman and chase master Virat Kohli was in his budding stage in 2014 when he surprised everyone by becoming the highest run-scorer in the tournament. During the tournament, Kohli had an astounding average of 106.33 and made 319 runs. The final versus Sri Lanka, when Kohli scored an exceptional 77 runs off 58 balls, was the closest chance for India to win their second ICC Men’s T20 World Cup Trophy.

A memorable tournament solidified the Bangladesh batsman’s status as a white ball great. Bangladesh was guaranteed entry to the tournament’s Super 10 round thanks to his amazing form. The century versus Oman was his campaign’s pinnacle moment. With a knock of 103 from 63 balls, Iqbal took the lead in setting a challenging goal. Regrettably, Bangladesh had trouble getting underway in the group phase as they lost all of their games but Iqbal managed to score 295 runs in 6 innings.

Pakistan captain Babar Azam is deemed to be one of the best batsmen of the current times. The opener has proved his worth time and again and last year’s T20 World Cup was a great tournament for him. Guiding his team to first beat India in the group stage and then to remain unbeaten till the semi-finals, Babar led his team from the front. In 6 games, he amassed 303 runs to his name with an average of 60.60.