Home » News » LSG vs RCB: “Walk the Same Path” LSG Mentor Gautam Gambhir Gave a Success-Mantra to the Players Ahead of the Clash against RCB – Watch

LSG vs RCB: “Walk the Same Path” LSG Mentor Gautam Gambhir Gave a Success-Mantra to the Players Ahead of the Clash against RCB – Watch 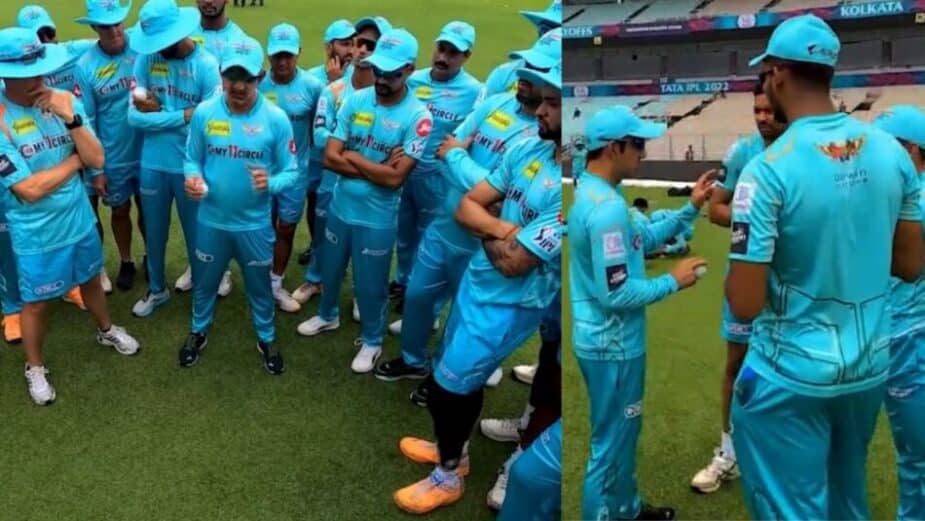 LSG vs RCB: One of the most important clashes of the TATA IPL 2022 will take place at 7:30 pm at the Eden Gardens. In the Eliminator, the Lucknow Super Giants will face Royal Challengers Bangalore. Both teams are charged up to deliver their best game and to advance one inch closer to the championship. The winner of this match will then face Rajasthan Royals in the Qualifier 2 on May 27 at the Narendra Modi Stadium.

But just ahead of the all-important clash, LSG mentor Gautam Gambhir was seen giving some guru-mantra to their players. He looked pumped up and gave a mantra of success to the team in his own style. LSG, who won their last match against KKR, has already played with RCB in the league stage. But they lost that match, so KL Rahul and his team will look to settle the score between the two teams. However, a loss in the Eliminator means the end of the road. Free VIP betting tips and match guides from professional betting tipsters here on our site..

LSG vs RCB: Gautam Gambhir giving a motivational speech to the players – Watch

The team played their last game on May 18th, and a gap of six days can surely give them the chance to regroup. However, their practice session, which was supposed to take place yesterday, was washed out due to rain. Gambhir gave the speech, saying that everyone needs to focus working together and if they can do that, no one can beat us.

Notably, both openers broke a few records in their last game against KKR. They added a record unbeaten partnership of 210 runs in 20 overs. The left-hander scored the highest this season and the third highest overall IPL score. Both batters are in their best form and will look to carry on against RCB in this must-win clash. KL Rahul is the second highest scorer with 537 runs and De Kock is at third place with 502 runs.

However, they will look to replicate the last match’s performance against RCB. Because a miss in this game might be the last chance they will bat in this season. GT has already advanced to the final. And if LSG plays well, it will be quite excellent that both new franchises will be in the final. But for that they need to give their all and came out all guns blazing against a spirited RCB. Read Bet365 reviews here and learn more about how this app works for betting online.

The final will be played on Sunday, May 29 at the Narendra Modi Stadium in Ahmedabad. The BCCI has already announced that 100% of the stadium’s capacity will be allowed. Already, all the tickets have been sold. That means it will be a packed house of over 1,00,000 spectators.