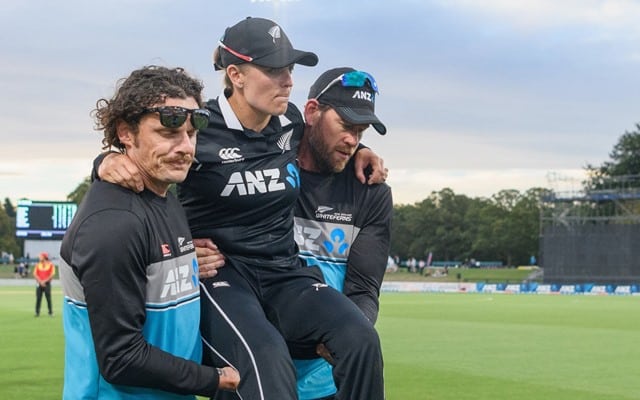 New Zealand women team fast-bowler Lea Tahuhu has suffered a hamstring injury and has subsequently been ruled out of the ongoing ODI series against England. The pacer suffered the injury in the first match of the series, which was being played at Christchurch. The injury was so bad that she had to be carried off the ground with help. Take a look our betwinner review and get free tips from the experts.

The 30-year-old pacer will now try to achieve full fitness before the start of the T20I series, which will be played right after the ODI series. After the incident happened on field, New Zealand team head coach Bob Carter said that it was unfortunate for the team to lose her services.

“It’s unfortunate news for Lea and a big loss for the team,” Bob Carter said according to Cricbuzz. “We wish her the best of luck with her recovery and know she’ll be doing everything to get back on the park as soon as possible.”

Carter further added that it will be a great opportunity for the young Gabby Sullivan, who has been called up to replace Lea Tahuhu. “The flipside of this is a great opportunity for Gabby who’s been impressive for Canterbury and deserves the call-up, ” Carter added. Sullivan is a 22-year-old pacer from Canterbury who received a maiden call-up is yet to make her debut for New Zealand women. She will be with the squad for the next two ODI matches. Check our  live cricket tips and tricks here in our website.

New Zealand lost the first ODI against England by eight wickets. Batting first, New Zealand were bowled out for just 178 runs in 45.1 overs, which was a collective performance from the England women bowlers. For New Zealand, Hayley Jensen and Brooke Halliday scored fifties but that wasn’t enough. Tammy Beaumont scored 71 while England skipper Heather Knight stayed unbeaten on 67 guiding the team to a win in the first match. The second ODI will be played at the University Oval in Dunedin on February 26, 2021.