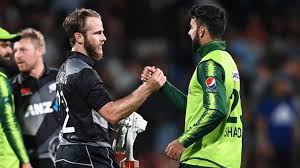 PAK VS NZ: The Pakistan Cricket Board (PCB) is receiving compensation from New Zealand Cricket (NZC) for canceling the tour last year in September 2021. The compensation sum is not revealed yet. But reports claim that the PCB will profit from New Zealand’s upcoming visit to Pakistan. The tour will include 10 white-ball games. Meanwhile, the two boards’ relationships have normalized. With PCB deciding to accept the offer to play in the triangular series in Christchurch in October. This will be just before the T20 World Cup in Australia. Read 10cric reviews here and know about how betting online works with this app.

After deciding on dates with England, the PCB will finalize the tour to New Zealand. As England will travel to Pakistan for seven T20Is in October. We can remember how the Blackcaps decided to return home before the first ODI in Rawalpindi on September 17, 2021, for security concerns. Even a phone call from then-Prime Minister Imran Khan to counterpart Jacinda Ardern was ineffective in stopping New Zealand.

New Zealand will tour Pakistan for three ODIs and two Tests in December 2022/January 2023. And they will make up for the canceled tour in April 2023 with five T20Is and as many ODIs. Before the T20 World Cup in 2022, the Pakistan Cricket Board has also accepted New Zealand’s offer to play a tri-nation series alongside Bangladesh and New Zealand. During the ICC meeting, hosts New Zealand offered a tri-nation series. Which the two countries accepted to prepare for their time on the international stage.

NZC Invited PCB For a Tri-Series In New Zealand

In June, Pakistan will host the West Indies for an ODI series before heading to Ireland. Babar Azam and his team will be hoping for a successful performance against both the West Indies and Ireland.

“The NZC has invited the PCB for a tri-series in New Zealand in the lead up to the T20 World Cup. We are presently reviewing the invite and will revert to the NZC following a consultation process.”

While Bangladesh, which was also invited by the NZC, has confirmed its participation in the series, Pakistan’s congested September schedule has prevented the PCB from making a quick decision. Pakistan will compete in the T20 Asia Cup from September 1 to 17, followed by a seven-match T20 series against England, the dates of which have yet to be determined. Another issue that the PCB is considering is games that are scheduled outside of the pre-determined Future Tours Program.

According to sources, the ultimate decision will be taken by the Pakistan team management, led by Saqlain Mushtaq, and will take into account the players’ workload. Know why Bet365 is legal in india and how this app works for betting online.