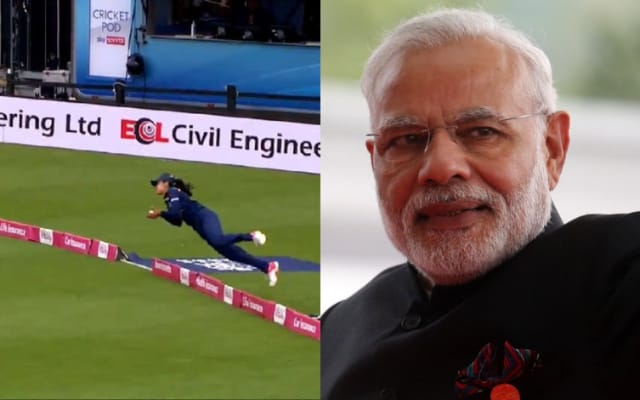 Indian women have had a disappointing tour of England so far. After marginally escaping defeat in the one-off Test, the Mithali Raj-led side succumbed to loss in the ODI series. A consolation win in the final ODI raised hopes of a better performance in the shortest format of the game. However, that was not the case to be as Indian women went down by 18 runs in the first T20I. We have betway review. Do check our full review.

Eve though it was England women who won the match, the moment that stole the show was Harleen Doel’s stunning catch to dismiss Amy Jones in the 19th over.

Watch the video of Harleen’s blinder below.

The acrobatic effort from Harleen earned her praise from all corners of the world. The latest to join the bandwagon is Indian PM Narendra Modi. PM Modi hailed ‘phenomenal’ Harleen for her effort by sharing the video of her brilliance which has been posted on the Government’s Instagram handle– ‘mygovindia’.

Look what’s today cricket prediction. Get some tips from us.

“That was a brilliant catch @imharleenDeol. Definitely the catch of the year for me!” Tendulkar tweeted.

VVS Laxman also praised Harleen for a brilliant catch and said it was as good a catch as one will ever see in cricket. ”

“As good a catch one will ever see on a cricket field, from Harleen Deol. Absolutely top class,” Laxman tweeted.

Former West Indies skipper Darren Sammy was left speechless with Harleen’s effort on the boundary to save a six.

The Board of Control for Cricket in India (BCCI) also shared Harleen’s video and wrote, “The result didn’t go our way today but here is something special from the game,” BCCI tweeted.