Home » News » PSL 2022: Rashid Khan Receives ‘Guard of Honor’ From Lahore Qalandars Team in His Last Match of the Season

PSL 2022: Rashid Khan Receives ‘Guard of Honor’ From Lahore Qalandars Team in His Last Match of the Season 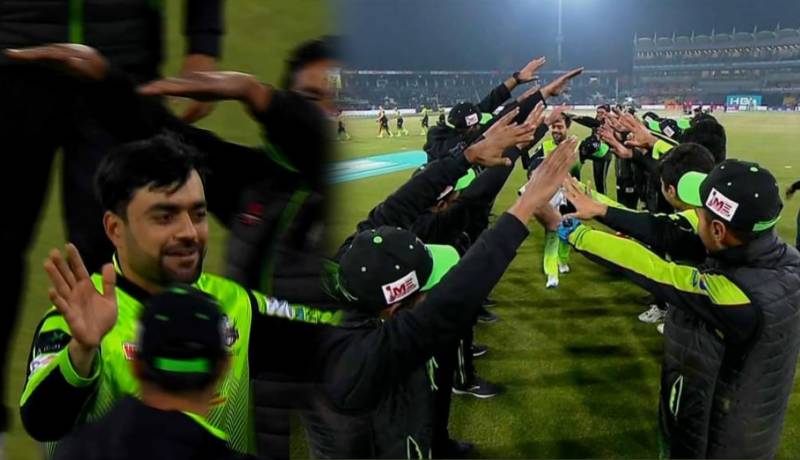 Rashid Khan played his last game of the Pakistan Super League 2022 on Saturday. The 23-year-old got an honorary guard of honor from his PSL teammates. His teammates, including skipper Shaheen Afridi, lauded the Afghanistan bowler for whatever he did for the team in PSL 2022. Get the latest PSL 2022 news updates and match predictions.

However, the fans were saddened to learn of the early departure of their star spinner. Lahore has a few games left to play in the tournament. It will be interesting to see how the team performs and who will replace him.

The Pakistani fans also thanked the champion bowler for his time in the country. Rashid will be joining his international team, who will be touring Bangladesh for their next assignment. Starting on February 23, Afghanistan will play a white ball series against the Bangla Tigers at their home ground.

Watch the Video at Rashid Khan’s Farewell from PSL 2022

Rashid Khan has been exceptional for the Lahore Qalandars in the Pakistan Super League 2022. The leg-spinner has performed as per his reputation, with both bat and ball. He picked up two wickets for just 19 runs in the last match of the season against Islamabad United.

Rashid played 9 matches in the seventh edition of the Pakistan Super League 2022. He took 13 wickets at an impressive average of 17.30. Rashid’s economy rate was also superb; he gave away runs at an impressive economy rate of 6.25. The leg-spinner is the fourth highest wicket-taker in the history of T20I cricket. He has taken 103 wickets in just 56 T20I matches so far. He has two five-wicket hauls to his name as well. Here are today’s free Cricket Match Betting Tips from the betting experts.

Rashid has dominating numbers in ODI cricket as well. The leg-spinner is the highest wicket-taker for his country in ODIs. He has played 77 ODI matches and taken 146 wickets at an average of 18.49.

Afghanistan will tour Bangladesh for three ODIs and two T20Is starting on February 23. Both teams will start the tour with three ODI matches, followed by two T20Is. All three matches of the ODI series will be played at the Zahur Ahmed Chowdhury Stadium, Chattogram. And Shere Bangla National Stadium in Dhaka will host both T20Is.

Afghanistan Squad for tour of Bangladesh

Get here the Cricket Top Betting Apps for IOS and Android.