PSL 2022: Wasim Akram issues clarification after video of him involved in intense discussion with Babar Azam during match goes viral 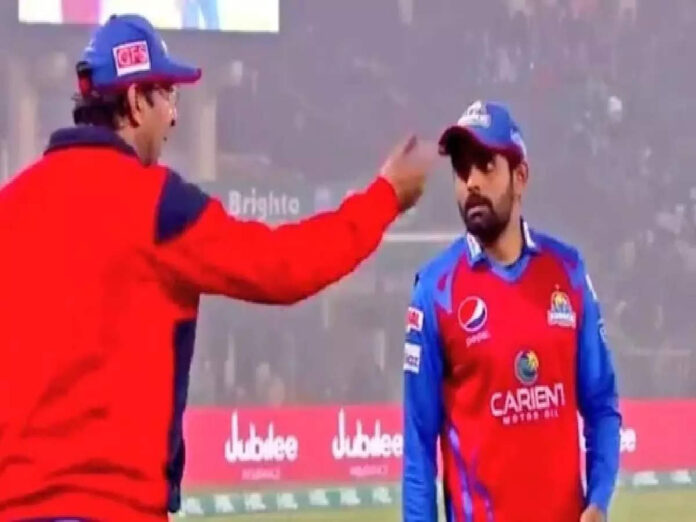 PSL 2022: Pakistan’s great legend Wasim Akram has finally issued a statement. After a video of him about intense discussions with the Karachi Kings skipper Babar Azam came out. That clip went viral on social media on Wednesday 16th of February.

It happened during a league stage match of Pakistan Super League (PSL 2022) against the defending champions Multan Sultans at Gaddafi Stadium in Lahore. Akram is the mentor of this Karachi-based franchise. This season is not at all a good one for Karachi Kings. The Kings are already out of the playoffs race having lost all their eight games so far the season. Find more latest updates of the PSL 2022 Season and match predictions.

Talking about their clash, the pressure was on the Babar Azam-led side. As they are still seeking their first victory in the ongoing PSL 2022. When the game against Multan looked poised for a thriller finish in the final over. Cameras witnessed Wasim Akram, having a discussion with a skipper near the boundary line and suddenly also yelled at the latter as a disgruntled captain looked on.

The Karachi Kings eventually again face the defeat by seven wickets in the contest. The tension between Akram and Babar soon became the talking point on social media as well. Pakistan cricket fans were convinced that Babar was ‘scolded’ by Akram on the boundary line during the match.

“What’s happening here. Wasim Akram, You can’t do this with Babar Azam,” a user shared the video of the incident on Twitter.

Read some reviews about Mobile Bet365 here and know how it works online.

PSL 2022 : Here is the video of Babar Azam and Wasim Akram

Taking to the micro-blogging site, Wasim Akram clarified everything at the same time. Also said that the reactions have surprised him. As he has been getting all this for having just a chat with Babar Azam at the boundary.

The ex-left-arm speed gun then made it clear that he was just asking why the Karachi Kings bowlers were not bowling yorkers or slower ones offside off. Heaping praise on the current Pakistan skipper, Wasim went on to add that the modern-day batting superstar is a wonderful boy and has tried his best.

The legendary former left-arm pacer has now given his clarification on the heated exchange between him and Babar.

“Hello ! Surprised to see reactions on my talking to Babar at the boundary last night. What I was saying was ‘why our bowlers are not bowling yorkers or slower ones offside off’ nothing else. Babar is a wonderful boy and has tried his best. And what he wants for dinner,”

PSL 2022: Talking about the match, an explosive inning of 40 runs off 29 deliveries by wicketkeeper batter Joe Clarke and 32 off 16 balls by all-rounder Imad Wasim had come at the backend of the innings. It helped the Karachi Kings post a challenging total of 174/6 from their 20 overs after winning the toss and electing to bat first.

In another half of the match, inform run machine Mohammad Rizwan (76) and opening partner Shan Masood (45) added 100 runs for the first wicket. The middle-order duo of Rilee Rossouw (14*) and Khushdil Shah (21*) ensured there were no further hiccups as the title-holders won a final over thriller to remain at the top of the PSL 2022 points table being unchallenged. Get the best betting apps in india for IOS and Android.