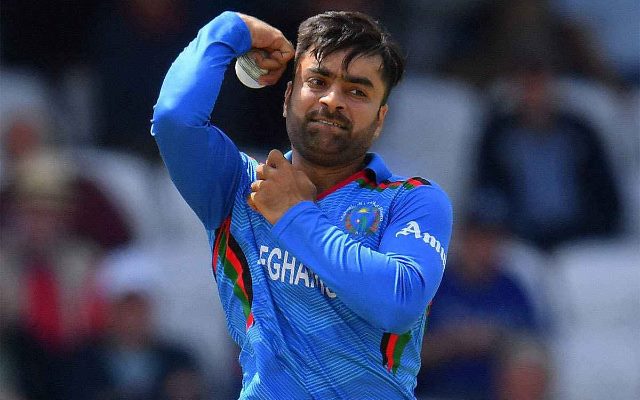 Afghanistan stalwart Rashid Khan has etched his name in records books by becoming the fastest bowler to take 100 wickets in T20I cricket. Rashid, who played for Afghanistan in the 20-20 World Cup game against Pakistan, dismissed Mohammad Hafeez to breach the 100-wicket mark. He also became the fourth bowler to take 100 T20I wickets after Lasith Malinga, Shakib Al Hasan and Tim Southee. Rashid achieved the feat in his 53rd match, leapfrogging Lasith Malinga, who had taken his 100th wicket in his 76th game. Check our newest cricket tips and tricks here in our site.

Rashid bowled a magnificent spell and took 2-26 in his quota of overs. Unfortunately, his efforts went in vain as Pakistan beat Afghanistan by 5 wickets. However, the team could be proud of their performance as they were in the hunt to win the match till the penultimate over. Pakistan needed 24 runs in two overs before Asif Ali smashed Karim Janat for four sixes in the 19th over to win the game for Pakistan. Babar Azam had also scored a vital 51 to help Pakistan recover from early blows.

Earlier, Mohammad Nabi and Gulbadin Naib scored 35 each to take Afghanistan to 147-6 after the top order was dismantled by the Pakistan pacers.

Both Babar Azam and Mohammad Nabi hailed Asif Ali after the match. “I was very confident Asif would get us out of any trouble we find ourselves in,” said Babar, whose team tops the Group 2 with six points in three matches.

“Asif’s hitting was clean and that’s why we selected him.”

“We didn’t start really well but the total on the board was decent but maybe not enough, only because of Asif,” said Nabi. Latest update of T20 Blast. Do check it here.