SA VS IND: “Shame on Bcci” Trends as Fans React on Twitter After South Africa Whitewashed the Indian Cricket Team 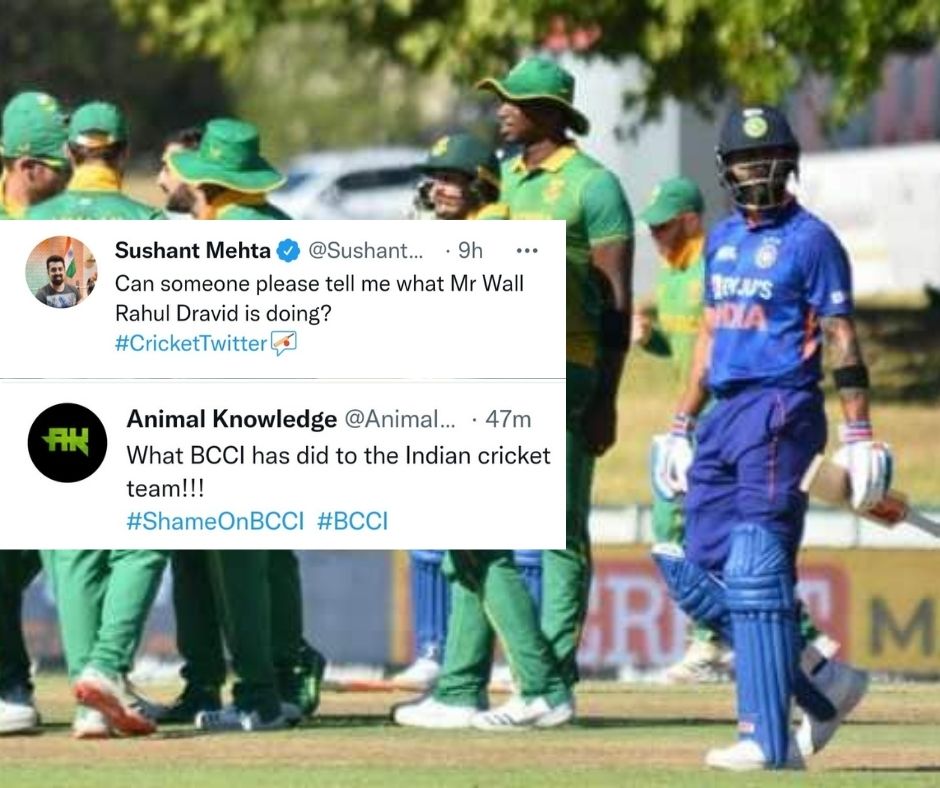 SA VS IND: After winning the first test by 113 runs, not many would have predicted that South Africa would have any chance against this powerful Indian side. But who would have thought that it would become a nightmare for Team India after that, losing five consecutive matches across the format? And now today, India has lost the third ODI by 4 runs and has also lost the ODI series 3-0.  Take a look the latest BBL schedule 2022 and get the latest news.

After winning the toss, India skipper KL Rahul chose to bowl first on a good pitch. India made four changes to their playing XI. Suryakumar Yadav, Jayant Yadav, Deepak Chahar, and Prasidh Krishna came in for Bhuvneshwar Kumar, Ravi Ashwin, Venkatesh Iyer, and Shardul Thakur. The Indian bowlers looked decent in the initial stage, and South Africa was 70/3 in 12.2 overs. But then came the 144-run partnership between Quinton de Kock and Van der Dussen for the fourth wicket.

Quinton de Kock smashed his 17th ODI ton and 6th against India in the 16th innings with a knock of 124 runs off 130 balls. Van der Dussen also contributed with 52 runs, which helped South Africa reach 287 runs in 49.5 overs. For India, Prasidh Krishna took three wickets, and Chahar and Bumrah took two wickets each.

Chasing the target, India lost their skipper early, who made just 9 runs. But after that, two of the most experienced Indian batsmen took charge and added 98 runs for the second wicket. Both of them were out in their 60s. Dhawan made 65 off 73 balls and Virat scored 65 off 84 balls. At one stage, India were struggling at 223 for the loss of seven wickets in 42.1 overs.

Deepak Chahar played a blinder, hitting 54 off 34, to keep the visitors alive. India needed ten runs in the last three overs, then a glory-seeking Chahar departed. He was soon followed by Jasprit Bumrah and it was 6 runs needed in 6 balls with nine down. Last man Yuzvendra Chahal tried to hoick the second ball in the last over, but ended up getting a top edge. India lost by four runs. Here’s our today’s IPL betting tips. You can check whole guide here.

Fans looked unhappy after such performance

As it didn’t go as per plan, India suffered a 3-0 whitewash. Fans were also unhappy with the captaincy, coach Rahul Dravid and the BCCI and showed their anger on Twitter.

Some Important Stats after the series loss

1. Most runs in an ODI where all 20 wickets fell

2. India getting whitewashed in a series (3+ ODIs)

3. SA winning by the fewest margin of runs vs India (ODI)

KL Rahul has also registered an unwanted record as a captain. He becomes the first Indian captain to lose each of the first three ODIs in charge.