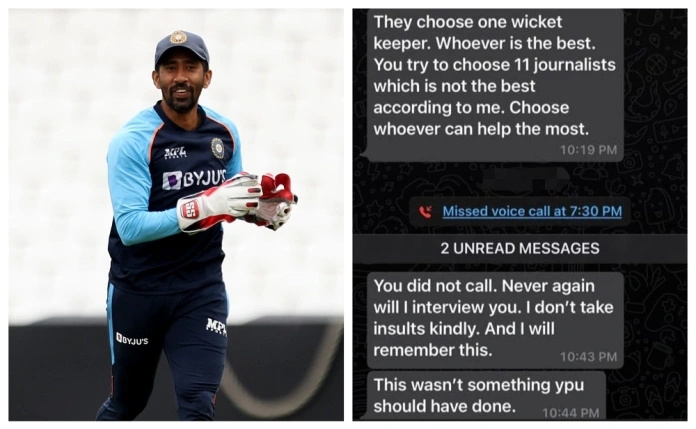 Saha vs Journalist: Wriddhiman Saha has been the central topic of discussions in Indian cricket, ever since he exposed a journalist’s threatening text on social media. The veteran wicket-keeper batsman is not keen to reveal things in the details.

The Indian Cricketers Association has offered its full backing to Wriddhiman Saha after he released the screenshots. After many former Indian cricketers urged BCCI president Sourav Ganguly to get to the root of the problem. Arun Dhumal confirmed on Monday that the board would ask Saha to share the name of that journalist. However, he doesn’t want to go that route as it could ruin the said journo’s career.

Find here more Best Cricket Betting Tips and learn more about them from the experts.

Saha vs Journalist : Saha’s take on This Incident

“I haven’t received any communication from the BCCI yet. If they ask me to reveal the name (of the journalist), I would tell them it was never my intention to harm somebody’s career, to pull a person down. That’s why I didn’t reveal the name in my tweet. That’s not the teaching of my parents. ”

Saha was quoted as saying by the Indian Express.

The BCCI has decided to intervene. And the ICA has issued a strong-worded statement, backing the Indian cricket board to take action by all means. The 37-year-old clarified that his only intent by sharing that message was to expose that such a person does exist in the industry.

However, he wasn’t keen to share the identity of that person back then and isn’t willing to do that now either. He added that It wasn’t fair, which I wanted to tell through my tweets. He who has done it knows it very well.

Saha posted those tweets because he didn’t want the players to face such things. He wanted to convey the message that what has been done was wrong and no one else should do it again.

In the screenshot shared by Saha, one of the messages from the unnamed journalist read: “You did not call. Never again will I interview you. I don’t take insults kindly. And I will remember this.” Captioning the tweet, Saha had said after all of his contributions to Indian cricket this is what he face from a so called “Respected” journalist! And he ended with saying “this is where the journalism has gone.”

Get the best and legit Online Betting Apps for IOS and Android.

On Tuesday The Indian Cricketers’ Association has released a statement. And the body condemned the “threatening message” sent by a journalist to wicketkeeper-batter Wriddhiman Saha. The ICA has also welcomed the BCCI’s decision to probe the issue.

ICA President Ashok Malhotra said in an official statement that they acknowledge the fact that the media plays a very important role both in the growth of our game and the players. But there’s always a line that which media should never cross.

“Ojha called me and said, ‘I won’t ask you about anything which is personal. If you feel that you want to go further on this or pursue the matter legally, the BCCI would support you’. I told him that at the moment I wasn’t willing and gave him the reasons. He responded to it saying, it was completely my decision,”

Looking for some Cricket Betting Sites List? Check out here and learn from the upcoming match.