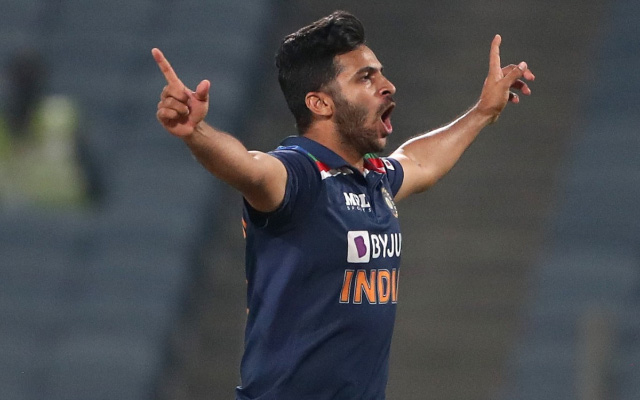 All-rounder Shardul Thakur has been added to the India squad for International T20 Cup, while Axar Patel, who was in the main squad has been dropped to the reserve category, which also has Deepak Chahar and Shreyas Iyer.

Earlier, there were speculations that BCCI may drop Hardik Pandya from the team and add a pacer to boost the fast bowling department. However, the BCCI decided to stick with Hardik but added Shardul as a backup to Pandya. Check our cricket prediction and tips.

Shardul has been in decent form in the second leg of IPL, picking up 13 wickets in 8 games. He will have an opportunity to add a few more to his tally in the tournament final.

The BCCI confirmed the development in a press release. It was also revealed that eight players – Avesh Khan, Umran Malik, Harshal Patel, Lukman Meriwala, Venkatesh Iyer, Karn Sharma, Shahbaz Ahmed and K Gowtham, will stay back in UAE and will help the Indian team in their practice sessions.

India will open their campaign against Pakistan on October 24 in Dubai. Ahead of the mouthwatering contest, the Men in Blue will take on England and Australia in the warm-up games.