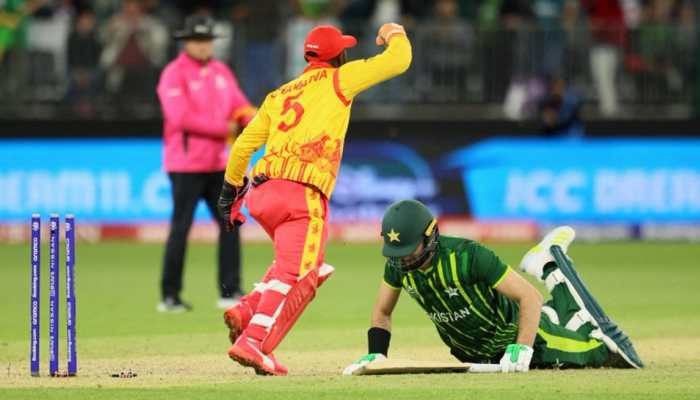 In a surprising turn of events, Pakistan has lost their second consecutive game in the ongoing T20 World Cup. Zimbabwe snatched victory from the mouth of Pakistan. Disappointed and dejected with 1 run loss, Zimbabwe has almost knocked Pakistan out of the tournament. Zimbabwe’s batting first struggled to maintain any partnership and was able to reach 130 runs.

Mohammad Rizwan who was in great touch before the start of the T20 World Cup failed versus Zimbabwe too. Captain Babar Azam, on the other hand, is still in the search of some quick runs. Since the Asia Cup, Azam has only done well on a couple of occasions. Pakistan had the game in their grasp as they needed 8 runs from the last 5 balls. Pakistan lost their set batsman Nawaz on the penultimate delivery of the game. This created chaos and Shaheen Afridi came to bat with 3 needed off the last ball. Despite him trying to run a double, he was run out and Zimbabwe won by 1 run.

Former Pakistan player Shoaib Akhtar has slammed Babar Azam for his poor captaincy in the T20 World Cup. In his latest video on his YouTube channel, “I don’t know why is it so hard for you guys to understand. I have said this before, and I am saying it again that with our top and middle-order, we can achieve big success. We can’t win consistently. Pakistan have a bad captain. Pakistan are out of the World Cup. Nawaz has bowled the last over in the three games we have lost.”

Additionally, Babar’s batting sequence was one of the topics that Akhtar said needed improvement in Pakistan. Akhtar mentioned that the ideal position for Azam to bat would be at number 3. He also raised concerns about the fitness of Shaheen Afridi. In both the T20 World Cup games played so far, Afridi has been wicketless. “Major flaw in the captaincy, and major flaws in the management. We will back you but what brand of cricket are you playing? You can’t just walk into a tournament and expect that the opposition will let you win,” he added.

The T20 World Cup semi-finalists of the previous year will now have to depend on the results of the other games to decide their future in this tournament. Moreover, henceforth, all the games Pakistan will play will be a must-win for them and a loss in even one can make the team pack their bags.