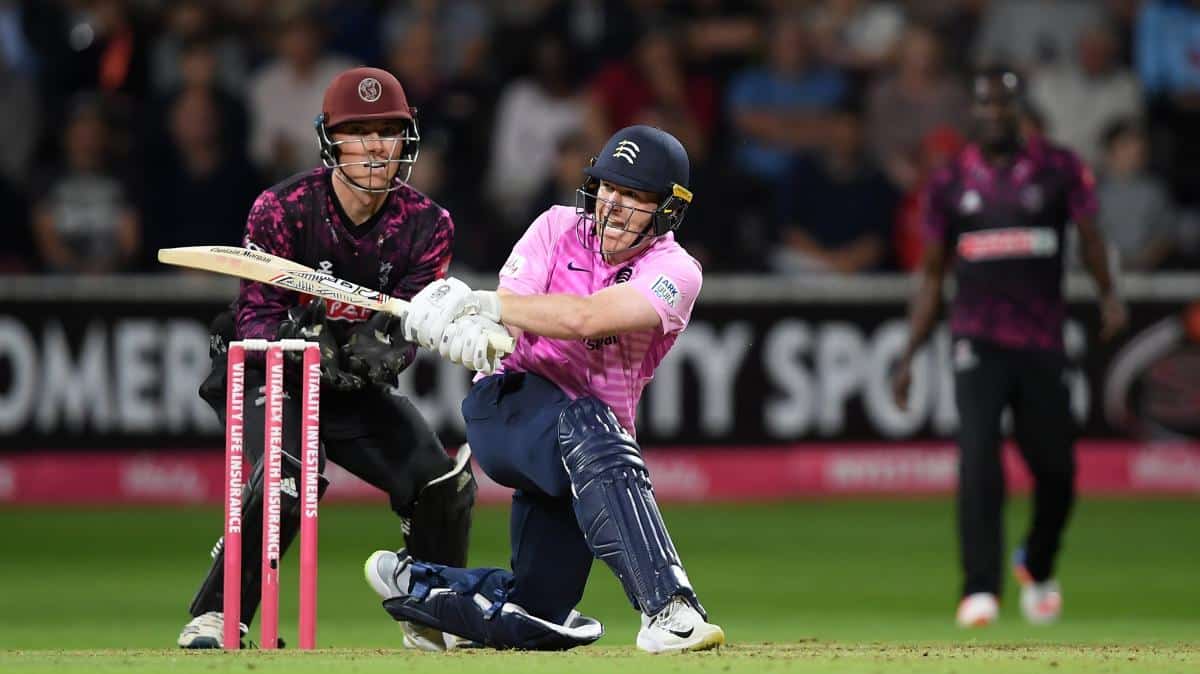 T20 Blast: After playing the first match for Middlesex, the English white-ball skipper Eoin Morgan has been injured. On Sunday, in a match against Glamorgan, during the first innings, Morgan sustained an injury and crawled back to the dressing room midway. Later, he didn’t even come out to bat in the second innings. However, a brilliant cameo from Joe Cracknell (47 off 28) and Max Holden (41 from 22) helped Middlesex chase down the target of 172 in 19 overs and register their third win on the trot. Looking for official betting sites in India? We got you covered! Here, we also bring you betting site reviews that are primed to offer a rewarding and safe wagering experience.

Earlier, in the first innings, spinner Thilan Walallawita registered his career best of 3/18. On the other hand, Roland-Jones took four wickets for just 22 runs in his four overs.

In another match between Leicestershire and Yorkshire at Headingley, Leicestershire won the match by 31 runs. Batting first, Colin Ackermann and his men posted a fighting total of 188/7 in their 20 overs. Rishi Patel and skipper Ackermann added 109 runs for the fifth wicket to help their team post a decent total. Both batters scored their respective half-centuries.

Rishi scored 57 off 37 and the skipper scored 56 off 33 balls. Defending the total, the bowlers did a really good job of restricting Yorkshire to just 157/9 and won the match by 31 runs. In the second innings, Dawid Malan was the top-scorer with 50 runs and Naveen-ul-Haq took 4/34.

T20 Blast: Lancashire secured their first victory in the competition.

In one of the matches between Lancashire and Worcestershire, North Group at the Emirates Old Trafford, Manchester, Tim David hit the joint-fastest half-century for Lancashire in just 20 balls. They posted 183/7 and David scored the highest, 60 off just 25 balls, including four boundaries and four maximums. Defending the target, Richard Gleeson was the star with the ball and registered his career-best figure. He took five wickets for just 33 runs and helped Lancashire win by 12 runs. Bet online by checking more new betting apps in India for the upcoming match here on our site.

The defending champions, Kent, are going through a horrible start as they lost their third game on the trot. On Sunday, they locked horns with Sussex at County Ground, Hove. Batting first, Sussex posted 171/5 in their 20 overs. Alsop (65 off 30) and Luke Wright (43 off 34) were the top scorers.

Chasing the target, Kent lost their wickets at regular intervals and none of the batters made any significant starts. Four batters were scored in the 30s and despite a late cameo from George Linde (38* off 13 balls), Kent fell short by 4 runs and lost their third match in a row.

Earlier, in another match between Warwickshire and Durham at Edgbaston, Birmingham, a match-winning knock by Chris Benjamin helped Warwickshire register a five-wicket win. Batting first, Durham scored 158/9 in their 20 overs. Chasing the target, Warwickshire had a horrible start and lost four early wickets for 36 runs. But then the fifth-wicket partnership of 85 runs between Benjamin and Adam Hose brought them back into the game. In the end, they went on to win the match by five wickets. Benjamin remained unbeaten on 68* off just 36 balls, including six boundaries and four sixes.

In a match between Somerset and Essex at The Cooper Associates County Ground, Taunton, both overseas stars, Marchant de Lange and Rilee Rossouw, had the match-winning impact. Both helped Somerset to win the match by six wickets. Batting first, Essex scored only 139/8 in their 20 overs. Critchley was the lone survivor and scored 60 runs. De Lange bowled superbly and took four wickets for just nine runs, including one maiden. Chasing the small target, Will Smeed (58) and Rilee Rossouw (67) added a 102-run partnership for the second wicket and helped their team chase down the target in just 14.4 overs. Free expert betting tips and match guides from professional betting tipsters here on our site.