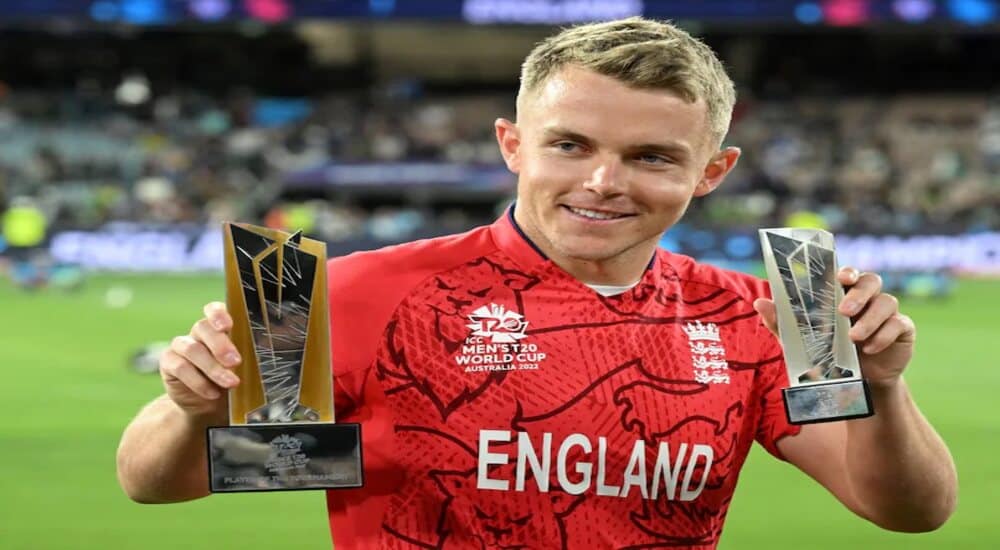 England all-rounder Sam Curran has been adjudged the ICC Player of the Tournament following his dream run in the ICC Men’s T20 World Cup 2022. The award was presented in the post-match presentation ceremony of the final game of the World Cup which England won by five wickets against Pakistan to clinch the title on Sunday, November 18.

The Jos Buttler-led side produced a clinical all-round performance to thrash Pakistan’s hopes of repeating the 1992 World Cup heroics in Melbourne after 30 years. Buttler chose to bowl first after winning the coin toss and the decision was proved right by the English bowlers. Despite losing Mohammad Rizwan early in the powerplay, Pakistan recovered well with 84/2, but the wicket of skipper Babar Azam led to a collapse and the Men in Green could only post a total of 137/8 in the end.

Sam Curran starred with the ball for England, taking three wickets for 12 runs. Adil Rashid and Chris Jordan chipped in with valuable contributions as well, taking a couple of wickets apiece. England’s start with the bat wasn’t ideal but they got to the target courtesy of a well-compiled knock from Ben Stokes, who smashed his first-ever T20I half-century.

There were a lot of strong contenders for the trophy. Some of the big names such as Virat Kohli Jos Buttler, and Alex Hales, plus Shaheen Afridi, Shadab Khan, Suryakumar Yadav, Sikandar Raza, and Wanindu Hasaranga were also a part of the list of contenders. However, in the end, it was the young Sam Curran who went away with the award. Interestingly, despite being an all-rounder, Curran won the award solely due to his bowling performances.

The left-arm pacer finished the tournament with 13 wickets to his name, second only to Hasaranga of Sri Lanka. He took his wickets at an average of 11.38, putting him seventh of all bowlers at the tournament, and finished with an economy of 6.52 – the best of all of England’s fast bowlers. In the process, he also became the first player to receive the award solely due to his bowling performances.

Playing his first-ever major ICC tournament, Curran made an instant impact on the biggest stage against top-class opponents. After winning the player of the tournament award, an emotional Curran fell short of words and shared the mantra of his success in the T20 World Cup 2022.

“To be honest, I am little bit lost for words, it has been a great tournament. First time for me in a World Cup and we have won it. Amazing crowd. I wanted to be adaptable coming into the tournament. I haven’t bowled much at the death before and that is one area I want to keep improving and want to improve my batting though it is tough to get to bat in this line-up. How good is it to be a World Champ (smiles),” said Sam Curran?