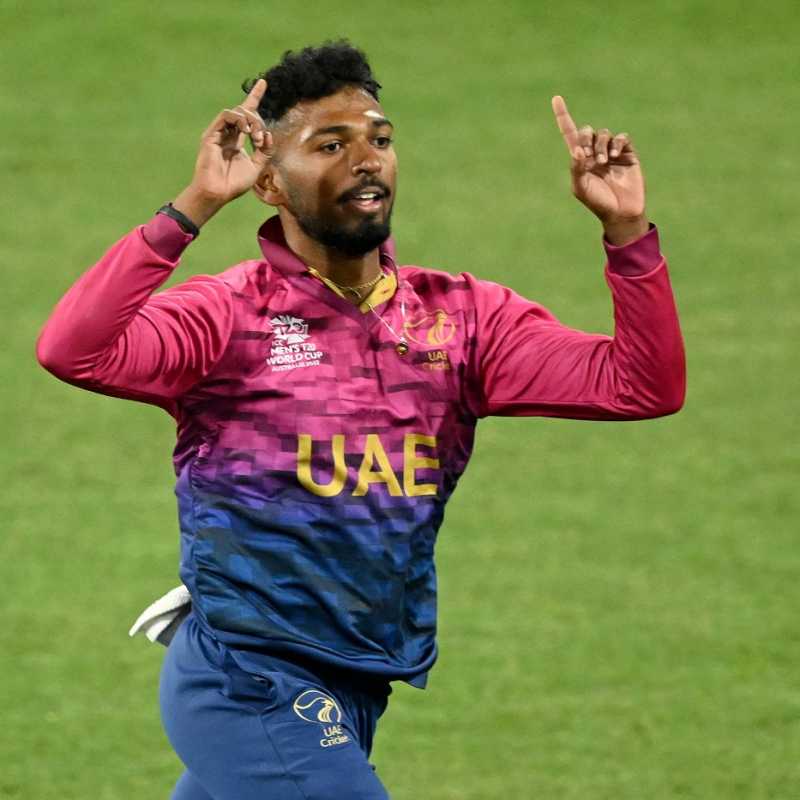 In the T20 World Cup qualifiers between UAE and Sri Lanka, UAE’s Karthik Meiyappan became the first player this year to pick up a hat-trick. However, despite the bowler’s effort, UAE could register a win. UAE won the toss and invited Sri Lanka to bat first. Sri Lanka had lost their last game and was determined to win this one. Their efforts were clearly reflected in their performance and they won the match by a huge margin of 79 runs.

Sri Lankan opener Pathum Nissanka contributed 74 runs from 60 balls. It was his performance that was the backbone of Sri Lanka’s first win in this T20 World Cup. Kusal Mendis was out early and after the wicket of Dhananjaya De Silva, the side lost wickets like a deck of cards. It was in the 15th over when the right-arm leg spinner took a hat-trick by picking up wickets of dangerous Rajapaksa, Charith Asalanka and captain Dasun Shanaka.

During the mid-innings break, Karthik Meiyappan said, “Definitely hasn’t (sunk in). Getting a hat-trick in a World Cup game against Sri Lanka. Against the leftie I wanted to take it away from him. Against Shanaka, that was a special ball for me to get him bowled between bat and pad. There was not so much purchase off the wicket, but it was important for me to bowl wicket to wicket. Will be the sweetest thing possible if the batters get us over the line.”

When UAE came to chase the target of 153, the batting order never looked in sync. Only 3 out of their 11 players reached a score beyond 10 runs. Unfortunately, the team was all out for 72 runs. Sri Lankan bowlers Dushmantha Chameera and Wanindu Hasaranga dismissed 3 batsmen each with Maheesh Theekshana picking up 2 wickets and Pramod Madushan and Dasun Shanaka picking up 1 wicket each.

After an embarrassing loss against Namibia in their T20 World Cup opener, this victory will provide the Asia Cup winners with great confidence. Sri Lanka will face the Netherlands in their final match of the qualifiers stage. The Netherlands have 2 out of 2 games and have nearly fixed their place in the super 12s. Sri Lanka and Namibia will have to fight for the second spot. Currently, Namibia occupies the second position in the points table with a better run rate.