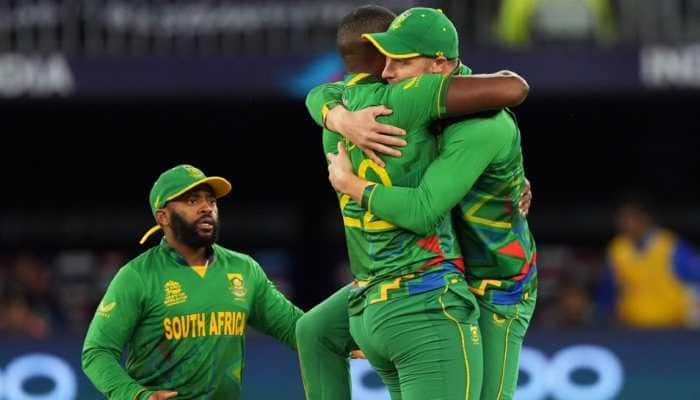 Another game in this T20 World Cup has produced an unexpected result because of rain. South Africa had an easy way to qualify for the semi-finals defeating Pakistan. However, now the situation has become interesting. The men in blue are the only ones sure to get to the next stage. Pakistan won the toss and decided to bat first. Thanks to the knocks from Iftikhar Ahmed and Shadab Khan, Proteas were facing the target of 186 runs.

South Africa lost Quinton De Kock and Rilee Rossouw. This time Temba Bavuma was the one who took the lead with the bat. During the 9th over of the second innings, rain knocked on the doors and an hour delay made the officials cut down the overs to 14. The batting team was forced to chase 73 runs in 5 overs to move towards the knockout stage in the T20 World Cup. This could have also meant Pakistan being officially out of the competition. Nonetheless, Shaheen Afridi and Shadab Khan’s heroics with the ball helped Pakistan take a 33-run victory over the opposition.

What are the qualification chances for the team in Group 2 of the T20 World Cup?

India: While there is no need for the Indian team to worry about the qualification, only in an absurd scenario will it be difficult for them. If supposedly, Zimbabwe beats India and both Pakistan and South Africa win their respective last games each, they will advance ahead and India will be knocked out.

Pakistan: First and foremost, Pakistan will have to defeat Bangladesh. In addition to this, they will want Zimbabwe to win against India and the match between the Netherlands and South Africa to be abandoned because of rain. In this scenario, Pakistan will have 6 points and a better run rate compared to South Africa. This will let them in the T20 World Cup semi-finals.

South Africa: Though the 33 runs loss versus Pakistan may have hurt South Africa a bit, they aren’t completely out of the competition. Just a win in the final game playing against the Netherlands will be enough for them.

Bangladesh: Similar to Pakistan, Bangladesh will just have to win the game. Moreover, they will have to wait for a washout between South Africa and the Netherlands. Irrespective of the poor run rate, Bangladesh’s one extra win in comparison to South Africa will come to their rescue in this ongoing T20 World Cup tournament.