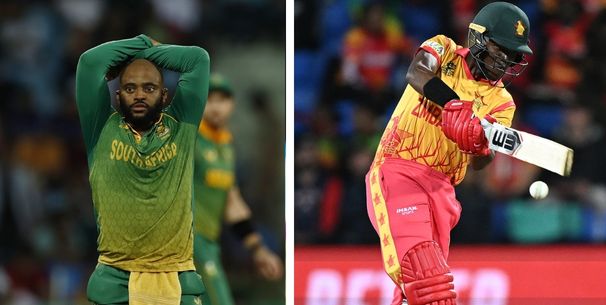 The weather conditions in Hobart played a spoilsport in an important T20 World Cup clash between South Africa and Zimbabwe. The rain-affected game was reduced from 20 overs to 9 overs when Zimbabwe was batting. The batting team at a loss of 5 wickets made 79 runs but unfortunately, the overs, as well as the target, were reduced to 64 runs in 7 overs. Quinton De Kock went off with a blistering start determined to take his team over the line.

In a dramatic turn of events in this T20 World Cup game, the South African side crossed 50 runs in just 3 overs. However, with just 14 runs left the heavy downpour began and the game was eventually called off. As a result, both teams were given a shared point but South Africa will have to defeat India as well as Pakistan to have a chance at the semi-finals qualification scenario. Amidst all this, Zimbabwean bowler Richard Ngarava, sustained the injury after he slipped.

Coach Dave Houghton was not at all pleased with it and called the playing conditions “ridiculous”. “I don’t think we should have even bowled a ball, to be fair. But the umpires are the guys making those decisions out in the middle and they seemed to think it was fit to play. I disagree with them, but there’s not much I can do off the field. The rain had got so heavy at one stage, it was ridiculous. For most of the evening, it was misty with mizzle. But it got to the stage where we could hear it thumping on the roof in the dugout,” he said.

Mark Boucher defended his team and said if the opposition were in a position as similar to those that they were, they would have wanted to continue playing too. “We were in a very good position. So if we walk away from this game thinking we were hard done by and whether the game should have taken place or not … If Zimbabwe were in our position they would have wanted to carry on playing,” he said. Zimbabwe has fought their way up to the Super 12s stage after winning games in the T20 World Cup qualifiers. Their next game is versus Pakistan on 27th October in Perth. Meanwhile, South Africa will have the next clash against Bangladesh on the same day.