Home » News » ‘The focus is to play good cricket and to win the remaining three games’ : Vikram Rathour

‘The focus is to play good cricket and to win the remaining three games’ : Vikram Rathour 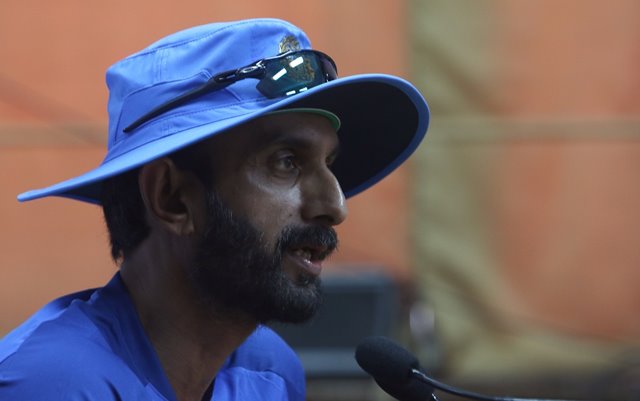 India’s 20-20 World Cup campaign got off to the worst possible start as the team lost their first two games to Pakistan and New Zealand. They now are in a tricky position and will need a miracle of sorts to progress to the semifinals. India need to win all their remaining games by big margins and also expect some other results to go their way. Here’s our complete list of cricket betting sites.

India batting coach Vikram Rathour, however, played down the team thinking about improving their net run rate saying they are keen on winning the remaining three games.

“At this time, the focus is to play good cricket and to win the remaining three games,” Rathour said

“I think this calculation will come into picture when we get to the last game, and when other results are out. “At this moment, no, there’s no focus on calculating run rates or anything. We’re just looking to play when and sort out issues and win the games.”

The wickets for the 20-20 World Cup have been a topic of debate. The surfaces are extremely slow which has made life difficult for the batters. While India batters have been in UAE for over a month due to the IPL, they struggled to cope up with the slowness in both games. Rathour admitted that the pitches have played a part in India’s shambolic display.

The pitches are definitely one of the factors,” former Indian opener Rathour said. “With variable pace and bounce, strike rotation is an issue and it’s not with only our team. “But yes, unfortunately that happened with us in the last game.”

Meanwhile, India’s next game is against Afghanistan, a must-win encounter. Afghanistan have played good cricket in the tournament and are placed second in the points table with two wins in three games. The team boast of a quality spin attack along with some dangerous batters. Rathour said that the team is wary of the threat Afghanistan poses. Check our comeon betting app review here.