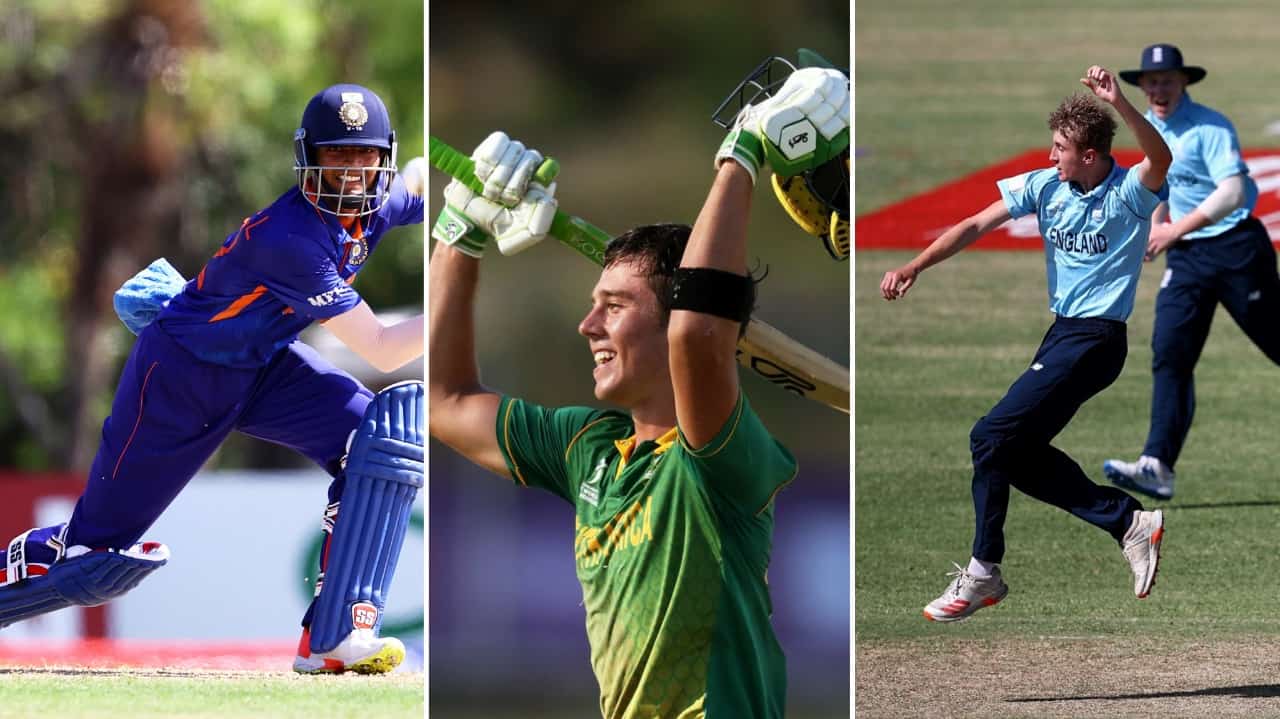 U19 World Cup 2022: Another Under 19 World Cup draws to an end, giving fanatics a glimpse of what International cricket’s future holds.  The players in this list join an elite club, including Shikhar Dhawan, Kagiso Rabada among others who created a name for themselves by putting in memorable performances throughout the Tournament.

The quality of cricket on display has been immense. For many, they will look back and realize that their careers started here. From ambidextrous bowlers to 16-year-old prodigies, the 2022 edition had it all. Without further ado, let us take a look at the players who stood out from the crowd. Read our cricket betting tips today.

India’s youngster Raghuvanshi made quite the splash with his wide array of strokes and gears. The sixteen-year-old left-hander compiled 278 runs including an eye-catching 144 against Uganda. Though he struggled against the stronger sides, the sheer weight of runs was what worked in his favour.

Though he would have liked to contribute in the Final, Raghuvanshi has impressed enough to make it to the team of the Tournament. Apart from being a top-order bat, the Delhi-born also chipped in with his handy left-arm spin, bagging two wickets. With India struggling to find part-timers, there will be a lot of focus on his career going ahead.

In what wasn’t a great World Cup for wicketkeeper batsmen, Pakistan’s Haseebullah Khan stood head and shoulder above his peers. He started and ended the tournament with a pair of 130s against Zimbabwe and Sri Lanka. He also scored a crucial 79 against Bangladesh, ensuring that his side did not stutter in a small chase.

Behind the stumps, he was equally effective, effecting 10 dismissals including 2 stumpings. He was equally effective against spin and pace, booking the keeper’s slot in this team. His left-handedness compliments Raghuvanshi at the top. Though he may not have the most eye-catching Strike rate, it is compensated by the attacking batters around him.

Complimenting Raghuvanshi at the top is Australia’s, Teague Wyllie. The right-hander was one of the finds of the Tournament, often providing his side with solid starts. His 86* against the West Indies roped his team out of trouble and saw the chase through.

He also top-scored against Pakistan with a composed 71 off 97 balls. He played the role of an anchor to perfection, allowing others around him to be aggressive. With the senior Australian side aging, Wyllie will have carved a place in the selectors’ minds.

Captaining England, Prest led from the front, putting bowlers to the sword in the powerplay. Being one of the only players with First Class experience, it will be no surprise if his career is fast-tracked. He scored an unbeaten 93 against Canada, in a game where he also took 3 wickets.

That was followed up with a destructive 154* off 119 balls against the Emiratis. Unfortunately, he fell for a 6 ball duck in the Final, but that does not deter from the fact that he has an excellent Tournament. His off-breaks fetched him five wickets,  at an economy of 4.04.

Dewald Brevis will come out of the Tournament with his reputation-enhanced manifold. From being an unknown entity, he can now dream of an IPL contract. Like his idol AB de Villiers, Brevis can play all over the ground. In a disappointing campaign for the South Africans, their captain stood out like a beacon of light. He passed fifty-five times in six innings, including 2 nineties and 2 hundred.

His best performance was reserved for the Finalists England, against whom he scored 97 and took two wickets. He capped off by scoring 138 against Bangladesh, seeing home a close chase. His leg-spin can even provide ten solid overs on a good day. In fact, he went wicketless only in two games. Here are some betting apps in india that are safe.

Raj Bawa etched his name into the history books when he hit a record 162* against Uganda. He is now the owner of the record for the highest individual score for India in the Under 1 World Cup. He had little else to do with the bat, with India’s dominant top order doing the bulk of the scoring.

With the ball, he has been tidy, though wickets have not come easy. Bowling first change, the pacer took 4/47 against South Africa, running through their middle and lower order. He earned the Man of the Match in the Finals, taking five wickets and scoring a crucial 35. His all-around skills mean that a few franchises have eyes on him come February 12.

If ever there deserved to be a man of the series, it would be Dunith Wellalage in the 2022 U19 World Cup. The Sri Lankan skipper led as an example, finishing in the top 10 for most runs and wickets. He had a dream start to the tournament, taking 2 fifers, one of which came in a major upset against Australia. In that game Wellalage produced an excellent all-around display, following up his 5/28 with 52 crucial runs.

His best innings, however, came against South Africa, when he scored 113 to take his side to a respectable total. Unfortunately, his team did not progress through to the semis but the 19-year old’s heroics should remain fresh in the minds of fans.

Salzmann quietly had a good World Cup without ever picking up a bag of wickets. He showed his versatility with the ball as the tournament progressed, switching from opening the bowling to being the first change. Constantly pushing the 130’s, Salzmann regularly hurried batsmen with his pace and bounce.

His best performance came in the Quarter Finals against Pakistan, following up a quickfire 25 with 3/37. Salzmann finished the Tourney on a high, bagging 3/43 to secure third place for Australia. He also batted at number seven for his country and showed that he is more than capable with the willow. For the purpose of this team, Salzmann will take the new ball.

17-year-old Rehan Ahmed was a late addition to England’s playing 11. However, when he did get the chance, the leg spinner made it count, promptly picking three consecutive four starts. The youngster is the frontline spinner in this bowling lineup, along with Wellalage.

The Leicestershire-born gives the ball a rip, coupled with a mean googly that he uses to fox batsmen. The fact that two of his spells have come in the playoffs shows that he is not overawed by the big situation. Though he wasn’t required with the bat in this series, Ahmed is more than useful, boasting a List A average of 44.50.

Ahmed’s teammate Joshua Boyden emerged as one of England’s brightest prospects from this World Cup. Taking the new nut, the left-arm pacer took 8 wickets in the powerplay, including 3 in the very first over. In the Final too, he took out Raghuvanshi with the second ball of the innings. He was lethal at the death as well, coming in to clean up the tail.

Not only did Boyden pick regular wickets, but he also kept a lid on the scoring rate. His economy rate of 3.21 is the lowest among any fast bowler who has bowled more than 30 overs. Against Bangladesh in his first game, his 4/16 saw the Tigers faceplant to 97 all out. His left arm angle also compliments the rest of the bowling lineup nicely.

One of the fastest bowlers in the tournament, Awais Ali impressed everyone with his accuracy and movement. He is also the youngest on the list, only a month past his 16th birthday at the time of writing. He took three or more wickets on 3 occasions, with his best coming against Zimbabwe.

Awais came in as the first or second change which is also the case in this lineup. With his ability to hit the pitch hard, he can be quite the handful for any batter. Latest in an endless line of raw Pakistani pacers, Ali should be groomed properly before he can be unleashed onto the world stage. Here are some cricket prediction apps for android.