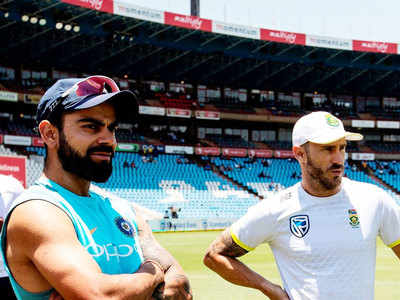 Faf has had a deep relationship with Chennai Super Kings (CSK). As he had been a part of the franchise for 11 long years. However, the journey ends on Saturday, when Royal Challengers Bangalore bid the highest amount to get his services for IPL 2022. Virat former captain of RCB stepped down from the captaincy after the end of IPL 2021.

Faf du Plessis reveals Virat Kohli’s welcome note after RCB singed him. Speaking to Rupha Ramani on RevSportz, Faf du Plessis revealed how Virat Kohli welcomed him to his new franchise. Ever since RCB have made the move for Faf, there have been discussions going on naming him the captain of the side. A move that could hand RCB their first IPL trophy.

IPL 2022: Speaking on the show, Faf on Virat Message

“I just got a message from Virat welcoming me into the squad which was very nice. I and Virat have got a good relationship over the years. Obviously, we have played a lot of competitive cricket against each other. Especially international cricket when I was the captain and he was the captain of India. We’re both very competitive personalities. So it would be nice not to compete against him. Because I hated the fact when someone got me out Virat was running past me and shouting something in my ears.”

“Even though that, especially the last year or two, we started speaking a bit more often. That’s going to be a great opportunity for me to play alongside one of the world’s greatest cricketers we’ve seen. I am looking forward to that,”

RCB had retained a total of 3 players before the mega auction. They retained Virat Kohli, Glenn Maxwell, and Mohammed Siraj. In the IPL 2022 auction, they got the likes of Harshal Patel, Faf du Plessis, Dinesh Karthik among many other quality players. The captain’s seat at RCB is still in the void. It will be interesting to see who gets to sit on it in the days to follow. Check out the complete IPL team list on our site and learn more about the upcoming Cricket match.