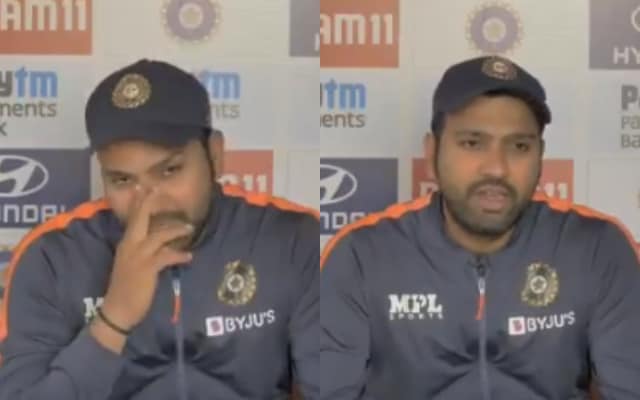 Rohit Sharma minced no words when he spoke about the pitch that was used for the second Test between India and England at Chennai. While many former cricketers had criticized the pitch and had even called it ‘poor’, Sharma has a differing view regarding the matter. Read our most recent betwinner india review.

The ‘Hitman’ opined that the Indian side does not need to think about overseas teams. He also stated that when the Indian side travels abroad, nobody prepares the pitches thinking about them. Sharma was also of the view that the International Cricket Council (ICC) should even do away with the ‘Home and Away’ concept and provide instructions on how pitches should be prepared. He also added that there is no complaining that happens from the Indian camp whenever they travel abroad.

“When we travel overseas no one thinks about us, so why should we think about them? The ICC should do one thing- they should remove the home and away concept and make a rule that the pitches should be of a certain manner. We never complain about the pitches that are dished out to us when we play overseas,” opined Sharma in a press conference.

Sharma further added that the pitch at Chennai was exactly the same for both India and England, and also opined that the pitches have stayed the same in India for several years. He concluded by stating that every team in the world will surely prepare pitches according to their strengths.
Here’s our recent betfair cricket tips and tricks.

“The pitch is the same for both teams. So I don’t know why there’s so much talk about the pitch. People say that the pitch shouldn’t be a certain type of way, but they have been like this in India for years. Every team plays to their strengths at home, and similarly, we do what our team prefers in India,” concluded Sharma.