Home » News » WI VS IND: “Will Continue to Bat in the Same Intent and Intensity”- Rohit Sharma Opens up on India’s Batting Approach Going Ahead

WI VS IND: “Will Continue to Bat in the Same Intent and Intensity”- Rohit Sharma Opens up on India’s Batting Approach Going Ahead 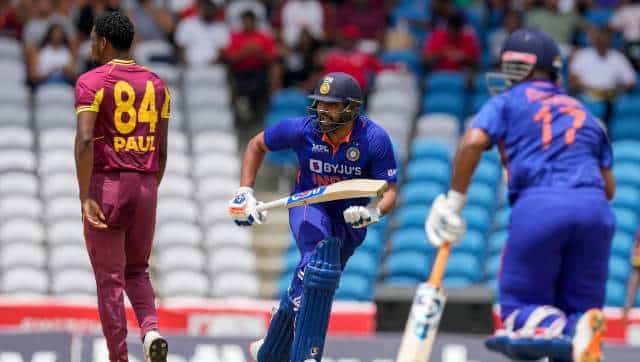 WI vs IND: On Monday, India faced their first defeat at the hands of West Indies in the ongoing tour. The hosts restricted the Men in Blue to a below-par target and then chased it down in the very last over. The Caribbean team won the match by five wickets to level the series at 1-1. The third game will kick off on Tuesday, August 2 at the same venue. The second T20I saw the complete failure of the Indian batting department, resulting in an avoidable defeat. If you are searching for the best betting sites in India, you are in the ideal place!

Batting first, India got all out for 138 runs in 19.4 overs. Skipper Rohit Sharma got out on the first ball of the match for a golden duck. Hardik Pandya was the top scorer with 31 runs. However, the failure of the Indian batting caused a lot of tension among fans. But the Indian skipper has backed the team and said that they will keep on playing in the same way.

WI vs IND: “Will keep the same intensity and same intent with the bat”- Rohit Sharma

West Indian left-armer Obed McCoy single-handedly put India under pressure and picked up six wickets. He ended with the best figure of 6/17 for his country. The target of 139 runs was never enough against the power-hitting of the West Indies. Even after that, the Indian bowler made a match of it. But in the end, Devon Thomas (31 off 19) helped the hosts get over the line. In the post-match presentation, Rohit praised the efforts of his bowlers. But he also highlighted the batting failure and said that they have some areas to address. Rohit said,

“But again, I will say that as well: we will continue to bat in that kind of fashion because we want to achieve something. Unless you try and do it, you will not achieve. So, I think, one odd result here and there, we shouldn’t panic. We will keep the same intensity and same intent with the bat.”

This is not the first time that a team has gone with an aggressive approach. Earlier, the defending ODI World Champions, England, carried this after their early exit from the 2015 ODI World Cup. Former English skipper Eoin Morgan backed his players and asked them to play fearless cricket. Rohit also said that there is no need to panic after one loss and they will maintain the same aggressive intent in their batting. Stay tuned for our 100% FREE cricket tips and match guides from our professional betting tipsters.