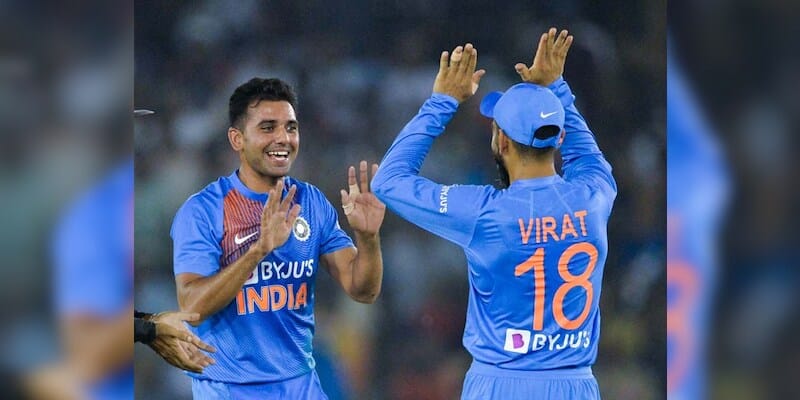 ZIM vs IND: The Indian team is currently in West Indies, playing the T20I series. The team will tour Zimbabwe for the three ODIs starting from August 18. BCCI has announced the 15-member squad led by Shikhar Dhawan. Bet online by checking more trusted betting sites in India for the upcoming match here on our site.

Everybody was waiting to see Virat Kohli in action, but you will have to wait because he is on leave. But, there are a couple of names, who are making a comeback to the team. With a lot of cricket being played, youngsters are having a great time playing against quality teams to rest the senior players.

ZIM vs IND: Here’s the 15-member squad for the three ODIs:

Shikhar Dhawan will captain the young team again. He has led India to victory in the ODI series against West Indies. The left-hander is back in form having scored two half-centuries in three innings.

Shubman Gill, the player of the series against West Indies, has been picked up to face Zimbabwe. Gill scored 207 runs in just three matches, with the highest score of 98 in the third ODI. The right-hander seems to be the perfect choice for the future.

The opener Ruturaj Gaikwad is yet to make his ODI debut. Ruturaj is a batter with pure class, we all have seen him score a century. He was the orange cap holder in 2021. The right-hander hasn’t scored much for the Indian team but will look to capitalize on the opportunity against Zimbabwe.

The Baroda man, Deepak Hooda, has made his mark on the Indian team. He had a decent start to his career, and now, he has joined the elite list of century scorers in the T20Is for India. The knock of 104 against Ireland stunned everyone, and now he will look to do the same against Zimbabwe.

Rahul Tripathi is still an uncapped Indian batter. He was picked up for the Ireland tour because of his heroics in the IPL in the last few years. He hasn’t played any game for India yet and will look to have a memorable debut in this ODI series.

The pocket dynamo, Ishan Kishan, has become a regular part of the T20I team. He is yet to make a place for himself in the ODI squad. Kishan scored a fifty on his ODI debut against Sri Lanka. He has only played three ODIs and will be looking forward to playing against Zimbabwe as the senior players are rested.

We are all familiar with Sanju Samson as he made his IPL debut back in 2013. After waiting for almost eight years, Sanju made his ODI debut in 2021 against Sri Lanka. He has shown what he is capable of doing by scoring a half-century under pressure against West Indies recently.

Washington Sundar, who was out of the team because of an injury, is making a comeback against Zimbabwe. Washy was injured and the last ODI match that he played was in February against West Indies. After the rescheduled Test, he was busy establishing himself in county cricket while playing for Lancashire.

The Maharashtra boy, Shardul Thakur, is a consistent member of the Indian team in all three formats. He had a pretty great ODI series against the Windies, taking seven wickets in three games. Shardul will look to take advantage of the opportunity against Zimbabwe by both bat and ball.

The chinaman, Kuldeep Yadav, is also one of them who is making a comeback after playing against the West Indies in February. In the absence of Yuzvendra Chahal, Kuldeep will have a huge role to play against Zimbabwe.

Axar’s heroics in the second ODI against West Indies stunned everyone. Not only does he contribute with the ball but with the bat too, scoring 64 of just 35 deliveries. Axar smashed five sixes and chased down the target for India.

Avesh has been a regular in the white ball squad for a while now. His economy rate while playing for India is much higher, but we know what he is capable of. He will be looking to grab as many wickets as he can in the absence of senior bowlers.

Prasidh Krishna has become a regular member of the white ball squad, whether the senior or the junior team. Krishna is a wicket-taker, and his height allows him to get extra bounce which is a plus point. Let’s see how he goes against Zimbabwe.

Siraj has been impeccable over the last year for the Indian team, whether it’s the longest format or the 50-over format. He kept his nerves and backed his yorkers in the first ODI when the Caribbeans were five runs away. Siraj took four wickets in three matches and ended the series on a high note.

India’s bowling all-rounder makes a comeback. Deepak Chahar will make a comeback against Zimbabwe. He missed the IPL, but now he is fit and ready to wear the blue again.

This bunch of guys will face Zimbabwe. And we have news that Virat Kohli has informed the selectors that he will be available for the Asia Cup, which will take place in the United Arab Emirates.